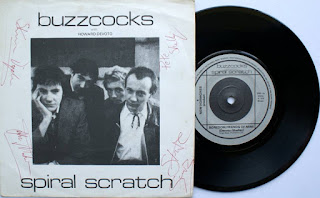 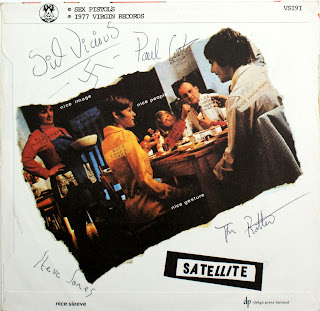 U.K shipping only - from my own private collection.
Unplayed copy - back of cover is fully signed by all four band members, strong clear signatures, rare Sid Vicious signature with swastika 100% authentic with letter of authentication, signed before the gig at The Village Newport Dec. 23rd 1977.
Posted by Blitzrecords at 15:26 No comments: 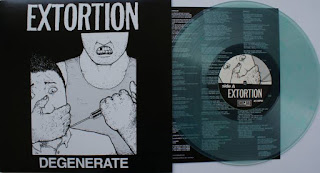 Limited coke bottle clear vinyl.
This is it! The best EXTORTION record! Their first full length, finally available again through BLITZ RECORDS. This is a masterpiece of modern powerviolence and in my opinion one of the best Australian hardcore LPs of all time. Don't miss out on it this time round! Absolutely Essential!
Extortion is a Hardcore Punk band from Perth, Western Australia. I absolutely love the vocals. if you like bands like Siege, Infest, Crossed Out, Negative fx, Poison Idea, Nailed Down, Dwarves, No Comment, then this band is for you.
A1 Arson
A2 Lose Control
A3 The Beginning Of The End
A4 Get Fucked
A5 Degenerate
A6 Life Under Lies
A7 The Rising Tide
A8 No Such Luck
A9 Overwhelmed
A10 Curb Crawl
B1 I Got Mine
B2 Deluded
B3 4 Outta 5
B4 Windows
B5 Manhunt
B6 Maniac
B7 Ramirez
B8 Messed Up
B9 You're Next...
Posted by Blitzrecords at 11:10 No comments: 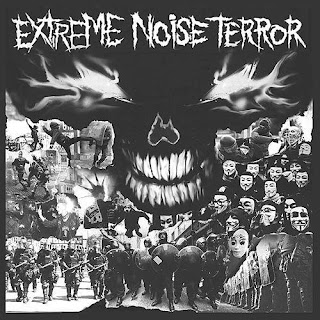 Green/purple/tan/peach marbled vinyl.
U.K.'s legendary crust-punk grind legends Extreme Noise Terror return with a new full-length! Heavy-ass-fuck and pissed off grind is what defines the ENT sound, and this album further cements their status as the reigning kings of the crust-punk world. Includes OUTO cover of "I Like Cola" mailorder limited wax available.
Among the kings of the late '80s UK hardcore scene, EXTREME NOISE TERROR, indisputably deserve their name to be written in big black capitol letters. After speeding up, together with Napalm Death, Doom, Hellbastard and the likes, what Discharge created back in the early Eighties and inspiring a whole generation of crust bands, EXTREME NOISE TERROR are back in 2015 with a new full length recorded last year. It's hard to believe this new masterpiece doesn't come from the same 1991 sessions as this is totally Phonophobia-core. This new self titled record sounds exactly as the old E.N.T. tunes we all fell in love with, so what you have to expect is the usual overdose of throat-cutting double vocals, thrashy heavy rotten sounding guitar riffs, helicopter-ish bass and turbo aggressive fast beats. For those who still don't believe it, I'm reporting what Dean Jones wrote us introducing the record: "The new album is back to total old school ENT (Earslaughter, Holocaust, Phonophobia) No Metal, No Blasts. Total pure ripping, ultra fast H/C Punk the way it originally was". And this is what their new singer Ben wants to state about his feelings towards the record: "I was a big fan of ENT as a teen, long before I joined, specifically of A Holocaust In Your Head and Phonophobia. If I was going to compare this new album to anything the band’s done before I’d say it sits nicely with those two. Catchy as fuck aggressive ultra hardcore punk riffs, fast frantic drumming and mental vocals; I don’t think Dean’s ever sounded as insane as he does on this one! It’s raw as fuck too, no click tracks or fixing-in-the-mix type shit, instead the drums, bass and guitars were done live with the leads added after and me and Dean sharing a mic going through a 76 year old analogue valve amp. We’re all hugely proud of this album, its a proper call to arms and a brutal statement that the band’s music and message is every bit as relevant today as when it was formed 30 years ago”. This record is totally in memory of their beloved singer Phil Vane who sadly passed away in 2011. Rest In Peace Phil and long live EXTREME NOISE TERROR!
A1 Punk Rock Patrol 2:12
A2 Dogma, Intolerance, Control 1:26
A3 No One Is Innocent 3:33
A4 I Like Coca (Outo "I Like Cola") 2.06
A5 Think Outside The Box 1:27
A6 Chained & Crazed 1:48
A7 An Endless Cycle Of Misery 1:57
B1 Sheep In Wolf's Clothing 1:46
B2 Cash And Trash 1:36
B3 Cruel And Unusual Punishment 2:12
B4 Last Fix Of Fame 1:51
B5 Cage Paralysis 2:04
B6 Only In It For The Music Pt 27(Black Putrefaction) 2:03.
Posted by Blitzrecords at 11:08 No comments: 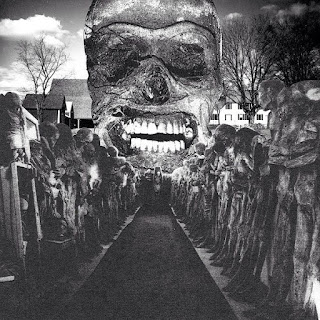 USA version, last four copies from Deep Six Records USA.
GOD'S AMERICA from Las Vegas, NV bursts out brutal power-violence/grindcore mix with slow parts. they have obviously been influenced by the best bands of the genre Crossed Out, Infest, and Spazz. This is the first full length as follow up on the raging 10 song 7" on Baltimore’s awesome A389 Records and split 7"
https://youtu.be/3kB3klW2SuU
A1 Apathetic Leash II
A2 Nothing At All
A3 Throes
A4 Pallation Of Life Abuse
A5 Sinkhole
A6 Keep Waiting
A7 A Minced Oath
A8 Pete Rose
A9 Famine In Uganda
A10 No
A11 Recent Studies
A12 Worthless In Deth
A13 4.2/1.8
B1 Extinction
B2 Trapped In The Gears
B3 Repeating
B4 Decomposition
B5 Charred Remains
B6 Wilderness Of Shitheads
B7 Perpetrate/Regurgitate
B8 Das Heilige
B9 Regression
B10 Japan Name Song
B11 Acceptance
B12 Quietus
Posted by Blitzrecords at 11:05 No comments: 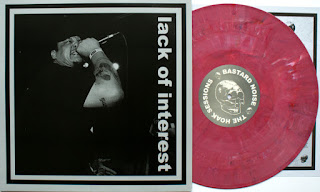 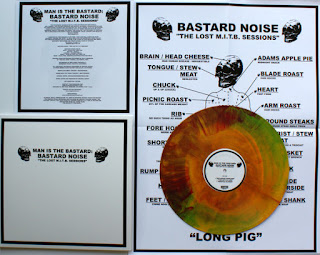 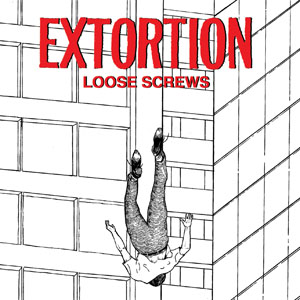 Extortion ‎– Loose Screws - 10".Been many a year since I had this bad boy in - lots more Deep Six restocks available here - https://blitzrecords.bigcartel.com/POWER-VIOLENCE HARDCORE. Arguably the most potent musical force Australian music has seen in the last couple years, Perth's EXTORTION are set to launch a fresh attack on the senses with their latest balls-out thrash incursion, "loose screws". A 12 track effort pushes EXTORTION's well-established power-violence sound to face-ripping new extremes. Recorded across 3 continents, the basic tracks were laid down in California by producer Dan Rathbun (Tragedy, His Hero is Gone, Talk Is Poison), then completed vocals in Perth. As one final flourish, UK-based celebrity EXTORTION fan, Barney of NAPALM DEATH, added his unmistakable roar to the aptly titled "grind to a halt".
A1 Regrets
A2 Reality
A3 The Pessimist
A4 Maze
A5 Stare At The Sun
A6 Blindspot
B1 Kill The Lights
B2 Cheated
B3 Faulty Wiring
B4 Degrade
B5 Grind To A Halt
Vocals [Additional Vocals] – Mark Greenway*
B6 Socially Inept
Posted by Blitzrecords at 10:59 No comments: