TOM AND BOOT BOYS / THE RAYDIOS-SPLIT-7" show only 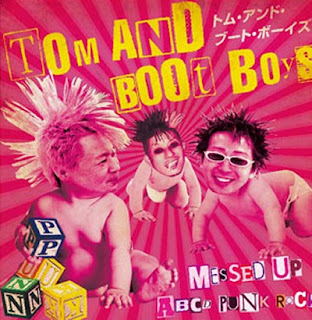 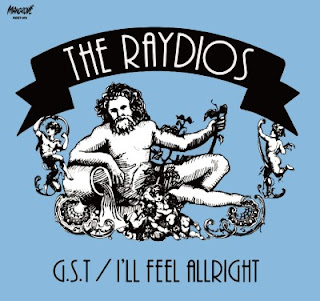 TOM AND BOOT BOYS / THE RAYDIOS-SPLIT-7" show only.
IN STOCK NOW - consume large amounts here - https://blitzrecords.bigcartel.com
Limited to 200 copies tour/show only issue - not for general domestic release - 2 songs each band.

TOM AND BOOT BOYS - One of the most influential oi/pogo punx band from Japan, legendary EP available on cassette bringing chaotic raw fucking drunk pogo punk since 90's.
THE RAYDIOS - Japanese garage power pop punk band from Tokyo formed around 1997 by Fink and Sammy after the breakup of Teengenerate, featuring Aoki and Yoda (The Havenot’s); The Raydios made their debut opening for the Misfits. Aoki quit and Fifi joined the band for about four gigs and then The Raydios broke up. During this time the band also recorded some material, later released on the "My Baby's Back" EP (Target Earth Records, 1998) and on the LP "Original Demo Recordings" (1999) edited by the German label Screaming Apple.
Fink, Fifi and Sammy later formed Firestarter.
Around 2007 Fink quit Firestarter and reformed The Raydios, with Azumi (ex-The Young Ones) and Kashima (Rockbottom).
After a 7" for the American label Three Dimensional Records and the Album "Now" in 2008 (Mangrove, cd only, released on vinyl by Dirtnap Records from Portland, USA one year later), Sawa of The Faceful joined the band.
Around 2011 Kashima was replaced initially by Kaz (Kill Times) and later by Suzuki (another ex-Young Ones) in 2012.
Posted by Blitzrecords at 14:39 No comments:

To The Point / Sidetracked Split - 7" 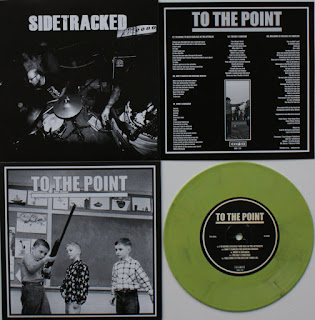 
Here it is - available for immediate consumption at https://blitzrecords.bigcartel.com


Sidetracked is super fast all the way through while To The Point does the same, not a lot different than Is It Safe. 500 press total. Preorder (200 copies) available now!
Posted by Blitzrecords at 14:35 No comments: 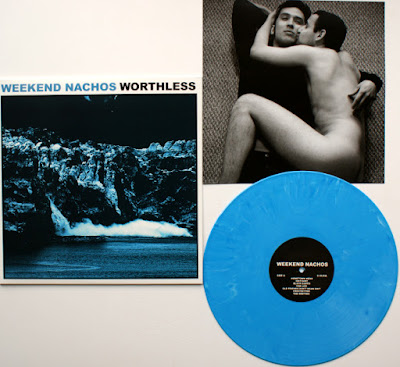 
ALSO BACK IN STOCK FROM WEEKEND NACHOS -
UNFORGIVABLE - green wax.
STILL - yellow wax.
http://weekendnachos.bandcamp.com/album/worthless
The most vitriolic hardcore album of the new millenium. Weekend Nachos are here to punish and destroy!
Weekend Nachos is all about their catchiness, their awesome groove parts, and their harsh vocals. There's no arguing with their unique blend of powerviolence, grindcore, and hardcore.
Hoffmann is able to masterfully twist his quick-fire vocal attacks into a twisted and frustrated viewpoint of agonizing bliss for the listener.The guitar distortion tone works excellently throughout the album to produce a truly vicious tone and generates the desolating feedback in the album’s self-titled instrumental track. The riffing throughout the album is very consistent in being able to switch, very quickly. Take for instance the blasting intro of ‘Old Friends Don’t Mean Shit’, stopped for just a moment ten seconds in to a series of well structured chords carried along by the drums.
Bass stays somewhat hidden for some songs, as the guitar does its fair part of clouding it throughout the album – particularly with the break-neck drum speed. But give the album a few plays through and you’ll know that a great level the bass truly gives to the guitar work – adding a significant layer to the musical assault. The tone it carries reminds me of true grind, a very rough and edged sound that goes very well with the music. In the particularly dissonant moments of this album; the grooving riffs of ‘Jock Powerviolence’ or entirely throughout the instrumental ‘Worthless’; the bass acts as a clear guide for the rest of the instruments.
All the while, the drums pick up a great, ‘run around and mosh’ pace to accompany the other instruments. Variations of fast paced d-beats and incredibly well timed snare blasts make the metal influence evident on the drums. The drums really do carry a large part of this album; cymbal speed is fantastic and all incredibly well timed and his ability to switch styles is also incredibly impressive (as shown in ‘For Life’ by the ambient to two-step beat transition). The drums give a significantly frantic feel to the songs by supplying what literally feels like anger, mirrored by John Hoffman’s vocals. Whether or not you like Powerviolence or have even heard of it, pick up a copy of Worthless. From the explosive opening chords of ‘Hometown Hero’ like a pack of C4 exploding to the utter desolation in the final and completely crushing ending of ‘Future’; this album is one hell of a ride, and a completely acceptable form of anger management. - thanx to Metal Archives.
A1 Hometown Hero,A2 Obituary,A3 For Life,A4 Old Friends Don't Mean Shit,A5 Frostbitten,A6 The Meeting,A7 Worthless
,B1 Friendship,B2 Jock Powerviolence,B3 The Fine Art Of Bullshit,B4 Dubviolence,B5 You Could Exist Tomorrow,B6 Future.
Posted by Blitzrecords at 02:46 No comments: 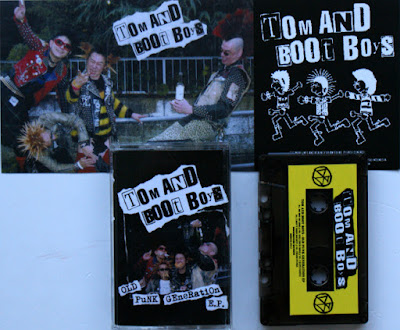 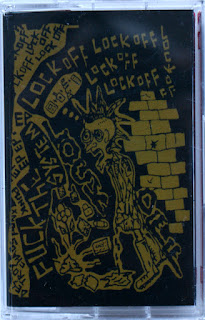 In stock now - consume it eagerly here - https://blitzrecords.bigcartel.com
LOCK OFF - Fuck The System EP
https://youtu.be/-Pfvw0-b57g
Debut release from Jakarta drunk panks. 6 tracks of pogo panx attack, and feel the smell of cheap booze and anti-depressive drugs. Drunk and pogo! Pogo till you puke!!
01. Punks Against Police
02. Violent Country
03. Fuck Off Government
04. Box Of Lies
05. Religion Authority
06. Fuck The System
Posted by Blitzrecords at 11:17 No comments: 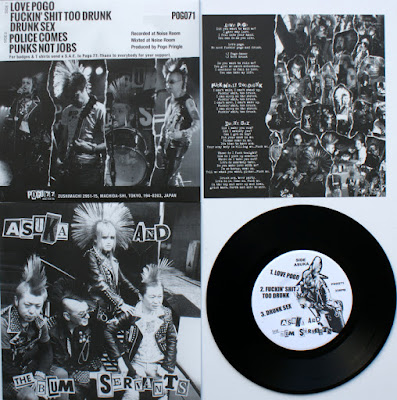 ASUKA AND THE BUM SERVANTS - ST - 7" JAPAN
In stock now - just a few left, already sold out at the label - so consume here without delay -
https://blitzrecords.bigcartel.com
5 song, limited press of 600 copies with lyric sheet.
This band was formed by members (EXTINCT GOVERNMENT/TOM AND BOOT BOYS/EX.THE DISCLAPTIES/EX.BEER BELLY) on Jan of 2015. Their sound is Female vocal UK82 classic hardcore punk like VICE SQUAD / EXPELLED / ELECTRIC DEADS / THE COMES / THE NURSE. this is their 1st 7" on POGO77RECORDS.
A1 Love Pogo
A2 Fuckin' Shit Too Drunk
A3 Drunk Sex
B1 Police Comes
B2 Punks Not Jobs
Posted by Blitzrecords at 17:01 No comments: 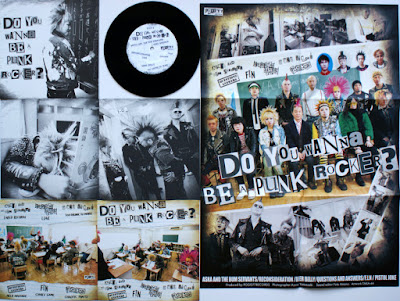 V/A - DO YOU WANNA BE A PUNK ROCKER? - 7" JAPAN
In stock now - absolute superb package from POGO77 with full color poster and 12 page booklet - just a few left, already sold out at the label - so consume here without delay -
https://blitzrecords.bigcartel.com
ASUKA AND THE BUM SERVANTS , RECONSIDERATION , BEER BELLY , PISTOL JOKE , QUESTIONS AND ANSWERS , F.I.N.
This 7" will be made for Young punks and New punk bands. ASUKA AND THE BUM SERVANTS is UK82 style punk. RECONSIDERATION is noise hardcore punk. BEER BELLY is POGO punk. PISTOL JOKE is DISORDER style noise core. QUESTIONS AND ANSWERS is classic UK82 HARD PUNK. F.I.N is old Japanese punk rock. 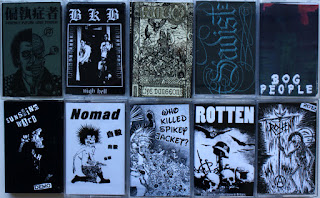 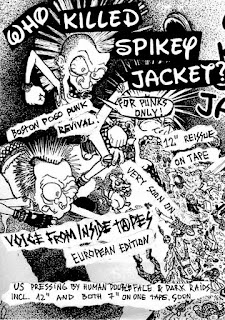 A1 Who Killed Spikey Jacket
A2 Pigs In Bondage
A3 Police Truck
A4 Adhesive Lung
A5 Oi Is A Way Of Life For Punks
B1 No More Pigs
B2 Leather Loves Studs
B3 Punks Dress Punk
B4 Spike Your Hair With Beer
Posted by Blitzrecords at 16:16 No comments: 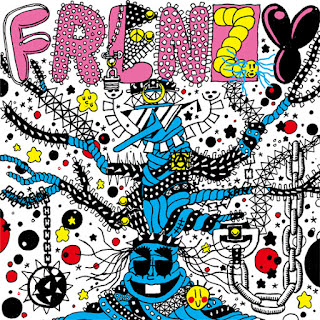 FRENZY-Disconnected-7"ep.
PRE-ORDER - SHIPS FROM JAPAN NEXT WEEK, SO HERE IN A FEW WEEKS - very limited stock so consume here without delay -
https://blitzrecords.bigcartel.com


PDX! PDX! everybody knows what place is there, They will come to Japan in Oct from Portland/USA. They recorded hurriedly recorded these high-quality sounds before their tour . but They made so intense songs cos they're representative sound makers of current pdx punk scene. members are from Nerveskade, Bi-Marks and punk dad Skell from Distort Reality rec. Disordered pogo noise punk with US Hardcore, involved few pop melody.


That's American aggressive and driving tunes into your head!
4 songs/400 limited.
Posted by Blitzrecords at 10:35 No comments: 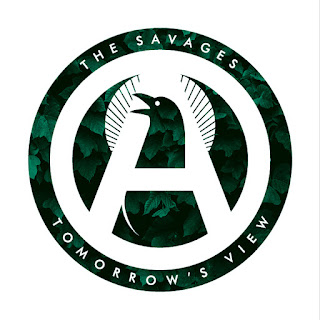 In vein of UK82' punk with melancholic early 80's German punk-Upright Citizens beat! founder member Kenta (gu/vo), his sound opinion turns just on this vinyl. There are including concrete jungle's isolation, sorrow and nihilism. It's just "survive" as punk rockers in Tokyo. for fans Skizophrenia, Raw Distractions...
Posted by Blitzrecords at 10:33 No comments: 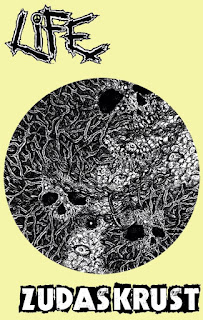 
LIFE hail from Tokyo, Japan and their name stands for “Liberty Independence Freedom Equality”. The band has been around since the early 90s and released their first demo in 1993. In this split EP they offers two songs of blown out yet rocking hardcore punk.
ZUDAS KRUST is a fast noisy dbeat out of Jakarta, Indonesia. A++. They offers three songs of raging noise inferno hardcore punk.
This is the cassette version for LIFE South East Asia tour in September, 2015. Vinyl version will also be out in the near future.
Posted by Blitzrecords at 15:02 No comments: 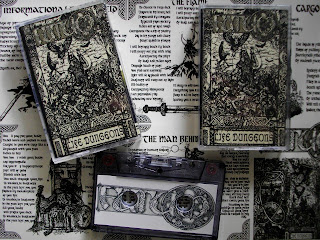 
Posted by Blitzrecords at 15:00 No comments: 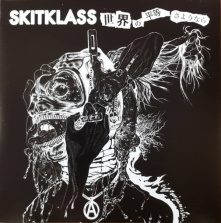