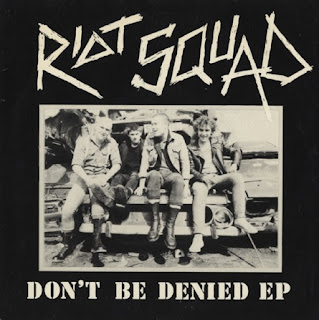 Riot Squad – Don't Be Denied EP Rot Records – ASS 1
Released:1983
Mansfield based RIOT SQUAD were originally formed in September 1981 in the small Nottinghamshire mining village of Shirebrook. The original lineup consisted of Dunk Mason (vocals), Paul ‘Pommi’ Palmer (drums), Nigel ‘Nello’ Nelson (guitar) and Wayne Butler (bass). They first started out by playing small local gigs in and around Mansfield before hitting the road and travelling up and down the UK on small tours. During this time the band found a keen interest from Mansfield based record label Rondolet Records and were soon signed up, firstly releasing ‘Fuck the Tories’ EP, which was produced by Mike Stone and then a second EP ‘Riots in the City’ was released. Shortly after this time, Nello left the band to be quickly replaced by local guitarist Staz, who only lasted a short tour. Three men were almost immediately reduced to two when Dunk announced that he was leaving to set up his own record label, which later became Rot Records.
From early on, 1983 saw big changes to the lineup… Wayne moved onto the guitar, while recruiting local bassist Ched to handle bass duties and lead vocals being taken over by ex-roadie (and Wayne’s brother) Lee. A few short weeks after the new lineup was established, Dunk approached RIOT SQUAD as his first signing. With this new lineup also came a different sound and approach to their earlier material and the band were soon gigging all over the UK. 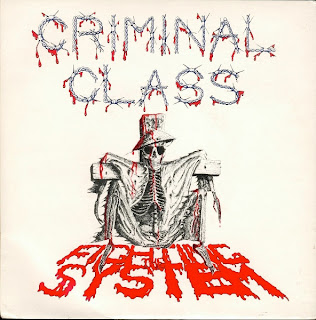 Criminal Class were oringally formed in 1979 by vocaist Craig St. Leon, drummer Mark Branski, bassist rick Bristow and guitarist Gary Meffen and there first gig was in December od the same year at The Zodiac pub in Conventry. Most of 1980 was spent playing gigs in and around the Coventry area quite often gigging with Crux. A Demotape was made during the summer at Woodbine Street Studios, Leanington Spa. The demo tape was sent to Garry bushell at ‘Sounds’ who seemed pretty keen on the band and invited them to appear at the first Oi! Convention at Southgate, North London. 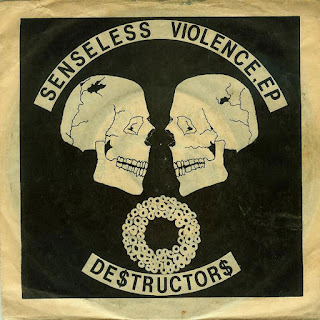 Destructors – Senseless Violence EP Carnage Records – BOOK 2  - Released:1982
The Destructors (aka The Blanks, Destructors V) are a punk rock band from Peterborough, England, formed in 1977 and active with a varying lie-up until 1984. They re-formed as Destructors 666 in 2006.The band was formed by former 6ck 6ck 6ck members Allen Adams (vocals), Phil Atterson (guitar), and Dip (Paul Wicks) (bass), along with a varying line-up including Andy Butler (drums). They changed their name to The Blanks before their controversial debut 1979 single, “The Northern Ripper” (released at the time that The Yorkshire Ripper was on the loose). The Destructors name was resurrected by Adams and Jackson with a new line-up of Neil Singleton (vocals), Andy McDonald (drums), and ‘Dave’ (lead guitar), with Jackson and Dave replaced by Dave Ithermee (rhythm guitar) and Graham “Gizz” Butt (lead guitar, formerly of The System, among other bands) before their next release, 1982’s Senseless Violence EP. Butt took on the job of writing about half of the band’s music, with Adams writing the lyrics. Singleton remembered the songs: “They could be very complicated and a right bastard to remember. He also seemed to have a fixation with serial killers!”. A series of EPs and two albums followed before 1984’s final album Bomb Hanoi, Bomb Saigon, Bomb Disneyland. The band split shortly after Bomb Hanoi, their records never living up to their live shows, and the band members falling out. According to Singleton: “I don’t think we ever made a really good record! They never ever lived up to our live shows; We were so much better on stage”. Of the frictions within the band, Butt said: “Neil couldn’t get on with Alan, and me and Dave didn’t want Andy on drums any more. We weren’t happy with Alan organising everything and neglecting his bass-playing role”. Adams immediately formed a new band, Five Go Mad In Europe, and resurrected the band name as Destructors V in 1984. Singleton went on to front Trench Fever. Butt went on to form The Desecrators, joined English Dogs, and later formed Janus Stark, also playing guitar with The Prodigy.
The band name was resurrected again in 2006 as Destructors 666, with former members Adams, Dave Colton, and Steve Rolls joined by a (largely) new group of musicians. They released a series of EPs from 2006 onwards and continue to perform live.

Disrupters - Shelter For The Rich - 7" 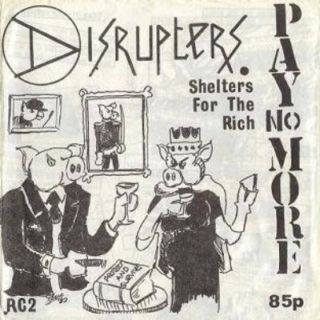 Disrupters – Shelters For The Rich Radical Change Records – RC 2
Released:Aug 1982
Anarchist punk band from Norwich, UK. Formed in late 1980, the band got off to an early start with a demo of Napalm being released by Crass Records on the Bullshit Detector compilation.1981 saw the recording and release of the first single, Young Offender, on the band's own label, Radical Change Records. This was a surprise hit in the indie charts and far outsold all expectations. The track Young Offender also appeared on Punk & Disorderly compilation.
By 1983 the band had a settled lineup of Steve, Kev, Paul & Steve.
The band were believers of direct action, which led to various arrests and court cases. They were also very active in their support of other bands, with releases by Destructors, Icon AD, Revulsion & Self Abuse on the band's label, as well as organising gigs.
The band split in 1988, disallusioned with the growing divides within the scene. Kevin went on to form Saigon Kiss. Steve Hansell was vocalist in New York Scum Haters.
In recent years there has been a DVD "Anarchy, Peace & Chips" released and also the anthology CD "Gas the Punx". There are murmers from The Disrupters camp that there may be a reform of the band.
Available from  https://blitzrecords.bigcartel.com/
Posted by Blitzrecords at 16:43 No comments: