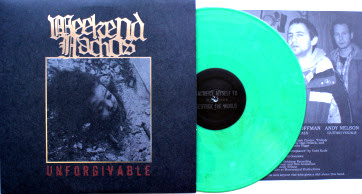 Weekend Nachos feature members of Harms Way and are once again mixing the powerviolence of Infest and Crossed Out with burly metallic guitars and masterful riffage, totaling twelve tracks on "Unforgivable."
Brutal as FUCK 2nd LP from my fave Chicago band. The band is now back with Andrew who was their guitarist on the 'Torture' EP but don't think for a second the band has reverted back to the sounds of that record. On this 2nd full length record the band still has some of that unique mix of NYHC, YOT and Infest sound as shown on the Punish LP but it also incorporates a bit more HHIG, Tragedy and Deathside influence of hardcore creating almost melodic angry hardcore tunes here but they also continue to add the influence of deeper and heavier hardcore to their sound that they'd previously hinted at in their evil blend of hardcore. There's even this early Hatebreed and Blood For Blood sound but fear not for where they got that sound down a little, there's more semblance lyrically to those bands. This is the most HATEFUL material the band has done to date and I've never in my life seen a band continue to write such angry and despising lyrics like this and to actually make them more pointed and just get better in time astounds me. The tracks off the This Comp Kills Fascists were already in the red but this really takes it. Basically John hates all of us and you have to accept that. This was one of 2009's best hands down and if you like hate filled hardcore and constantly feel like taking out someone, living a life that's constantly weighed you down by constant shit this LP is for you. Just buy the record already.
1. 2009
2. Elevated Tracks
3. Unholy Victory
4. Pain Over Acceptance
5. A Few Blocks South
6. Balance Of Power
7. Nights
8. Rejected Psychopath
9. Shot In The Head
10. First To Burn
11. Reason To Die
12. Unforgivable 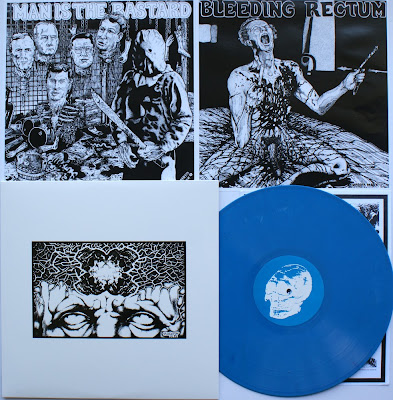 Charred Remains A.K.A Man Is The Bastard / Bleeding Rectum - LP - VERY LIMITED BLUE VINYL - great package with three superb inserts.
This classic 1992 release and 2013 reissue features one of the most underrated bands of all time within the H.C./punk underground: Bleeding Rectum. Hailing from Belfast, North Ireland, Bleeding Rectum has core members from Pink Turds In Space as well as Marty, a second devastating, teenage lead guitarist and Roy, the sickeningly, evil vocalist. Bleeding Rectum are the "real deal" in true, rogue, blitzing power and form. They define hardcore punk with their unduplicated musicianship and total system-hating lyrical concepts. Roy's violent and clear delivery is ferocious as it is brilliant. The lead guitar is wicked without being too "rock.” By today’s standards, Bleeding Rectum slays the competition with the highest levels of rebellion and musical prowess. A MUST LISTEN !!
On their fifth release, Man Is The Bastard explore new liberating and socially aware territories though the classic line-up of Barnes (guitar/noise), Connell (drums), Kenyon (bass/vocals/lyrics), and Wood (bass/vocals/lyrics). Tracks range in length from under one minute ("Idget Child") to over eight minutes ("Infibulation"). Man Is The Bastard’s dual bass and drums nucleus paired with the utter genius of Barnes' home made "caveman electronics” hold their own easily within the grooves of this platter. The Kenyon/Wood dual vocal compositions raise the bar to take hardcore to a new progressive level of writing. This is the height of the early stages of Man Is The Bastard and tracks like "Kai Lai", "Son Of Thug" and "Man Is The Bastard" only define the band's passion beyond expectations.