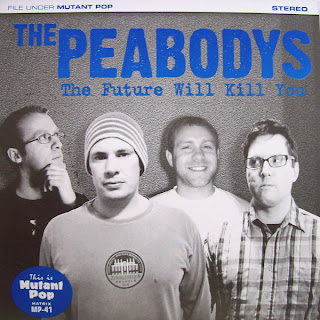 
Posted by Blitzrecords at 17:06 No comments: 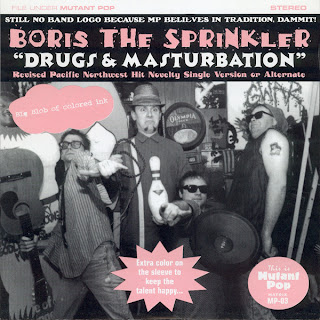 
Posted by Blitzrecords at 17:00 No comments: 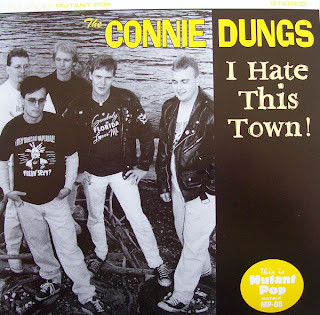 MP-08 THE CONNIE DUNGS "I Hate This Town!" EP -- reissue of a 1990s pop-punk classic, with a new PS. First 500 on clear gold vinyl. Technically this is the third CONNIE DUNGS 7", after their split with TUGBOAT and the Harmless Records release, but actually, this is the little record that first put the band on the map. Six great songs on one spinning slab, featuring Brandon Dung's plaintive lyrics and inimitable voice. This has long been one of peoples' all time favorite Mutant Pop Records, and it's my pleasure to bring it out of hibernation for another go round, despite my having previously called "last pressing" on a 45 piece edition in 2000 on opaque orange wax (long depleted).
THE CONNIE DUNGS. Pop punk poetry set to crunching guitars, sung by an ubernasal vocal contortionist. Words don't do justice. Utterly unique in sound. For my money one of the 4 biggest pop-punk bands of the 1990s (along with Screeching Weasel, The Queers, and MTX). You might add Jawbreaker and make it 5. Brandon Tussey "Dung" is a troubled soul and a great artist. The songs are upbeat and catchy, and heartfelt. The lyrics, first rate. Early material was cartoonish, later material much more serious and poetic in a Jets to Brazil/Weakerthans sort of way. This was one of the biggest bands "on" the label from 1996-2000. Brandon changed the band name to A Radio With Guts and made one more album after my 5. There is some chance he'll be back on MP someday; the probability of a new 7" is very, very high.--T. Chandler--Mutant Pop Records


Posted by Blitzrecords at 16:52 No comments: 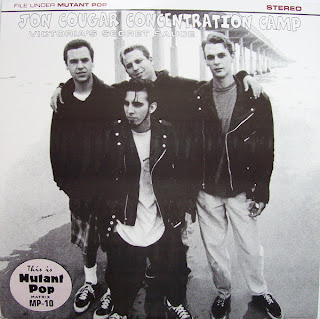 VICTORIA'S SECRET SAUCE/DON'T CALL ME A SPARTAN/I'LL BE WHERE I'M AT/COOPER TEEN-O
Jon Cougar Concentration Camp (JCCC) is an influential and now-defunct punk rock band from the San Diego, California area. They have released several albums, including the 1996 Melon (BYO Records) produced by the legendary Blag Dahlia, and the 1999 No More Room in Hell (Recess Records) which was effectively an album of unreleased demos.
Jon Cougar Concentration Camp was formed in January 1994 in San Diego, California by Chris Fields, Clint Graham, Travis Spatter, and Travis Milligan. “There were a lot of people coming and going back then. We were just the four people that happened to be jamming together that night we came up with the name,” said Chris Fields, speaking of the punk house he dwelled in at the time. They played their first show at The Casbah on January 31, 1994. Less than two months later they released their first 7” EP on their own label. JCCC toured up and down the West Coast over the next 6 months. Word of the band traveled fast and before they knew it they were releasing their first full length album. They juggled drummers over the following year, and when asked to tour the entire US, Dave Swain came in to replace Clint and Travis. JCCC were a three piece when they signed to BYO Records.
During a break between tours and recording in 1996, Chris joined The Queers to support their album Don't Back Down. Chris jumped between The Queers and JCCC for a year before bringing fellow JCCC member Dave Swain into The Queers as well. Fields said, “I felt bad putting JCCC on hold all the time and leaving Dave hangin.” For a while, both Chris and Dave played in both bands. JCCC even went out in support of the Queers on a US tour, and filled in for them in Italy. During the recording of JCCC’s Melon the band brought in punk rock legend Blag Dahlia (Dwarves) to produce the album. Blag was impressed by Chris’s talent and asked him to join the Dwarves. After being overwhelmed by all three bands, Chris left the Queers and ended Jon Cougar Concentration Camp in 1999. He played in the Dwarves over the next three years and still has close ties with them. Dave is still with The Queers.
From 2000 to 2006, JCCC occasionally played shows in San Diego with the original members.
Chris' newest project is called End Of Power and is still a current member of The Dwarves. Dave Swain is a member of The Queers, and has a new band called The Bugs. Fields produced and played drums on their debut album. During the recording of The Bugs, Dave and Chris along with other musicians recorded Screeching Weasel's My Brain Hurts album as Jon Cougar Concentration Camp. It will be released on Livid Records as a short vinyl only release sometime in 2009.


Posted by Blitzrecords at 16:44 No comments: