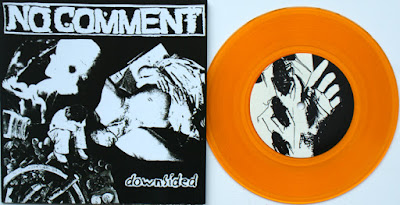 No Comment - Downsided EP - 7" GOLD vinyl in poster sleeve. IN STOCK NOW available at https://blitzrecords.bigcartel.com
On Deepsix eleven short bursts of anger in seven minutes equipped with some of the best drumming you will ever hear. If you are at all interested in Powerviolence, west coast hardcore of the early 90s, Slap-a-Ham records, or just punk in general, you need to hear Downsided. This 7" is the best Powerviolence release. Period. I dare you to try and find a better hardcore record from this era - thanx to icoulddietommorow.
1. Dead Stare for Life
2. Past Tense
3. Sarcastics
4. Distant
5. Hurt
6. Hacked to Chunks
7. Lament
8. Soiled by Hate
9. Downsided
10. Push Down & Turn
11. Curtains
Posted by Blitzrecords at 01:35 No comments: 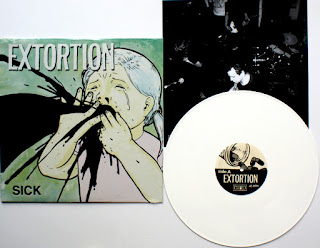 Extortion- Sick! LP - mailorder only on white vinyl - IN STOCK NOW. - available now at https://blitzrecords.bigcartel.com
Do you fancy powerful tunes? Do you like violent music? If the answer is YES, therefore you are a powerviolence hound! If so, these lads sure will appeal to you. Australia’s Extortion has got the idea of powerviolence pretty good- fast riffs, and even faster beats with a minimum of mid tempo or even slow parts. The only three slow songs are: Bedridden, Body failure and Rot (a teeth grinding instrumental), which are not to be doubted about their fuss and energy.
The matter of this very review is Extortion’s latest record, named SICK. And some sick album this is. An issue of Deep Six records, this white vinyl features tracks in the vein of bands such as Infest, Lack Of Interest, Crossed Out, No Comment. The album cover is something that catches your attention right away- a suffering little girl with tears of pain in her eyes vomiting black fluid. Quite remarkable. The songs are conceptual and describe the slow and excruciating death of a person infected with the H5N1 virus. Each next song’s lyrics describe a different stage of the illness (Infection… Fever… Medication… Bedridden… Last Breath). What a ferocious idea, eh? So if you’re in the mood for a sweeping whirlwind of angry hardcore- get a hold of this record!
Reviewed by Vinyl XXX Edge
Posted by Blitzrecords at 01:33 No comments: