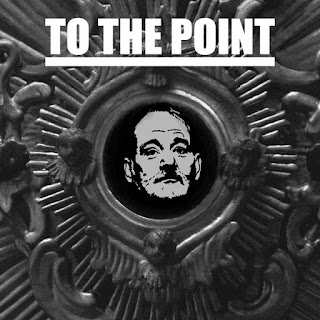 To The Point -3" lathe cut.
Novelty 3" lathe cut with die-cut cover and insert limited to 200 copies only - available at https://blitzrecords.bigcartel.com
A. Jesus Loves You B. Bill Murray
https://youtu.be/kNAjoKYBR5I
To The Point, the unstoppable group comprised of members of Actuary, Fetus Eaters, Lack Of Interest and Spazz. Caveman powerviolence. The musicianship here is tighter than a nuns nether regions, and the songs are crafted just how you would expect seasoned veterans of this style to make them; perfectly. I just love hearing Bob bash the shit out of a drum kit. Dude really blasts like no other, he definitely has captured a sound that is uniquely his own, with the very dry drum tone and super hard attack. It's also great to hear Chris Dodge, Caveman almighty, front a band again.
Posted by Blitzrecords at 14:22 No comments: