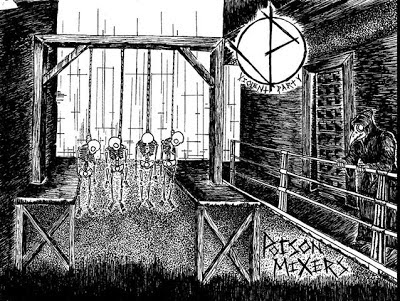 Violent Party - Poison Mixers - 12"
Violent Party was formed in the summer of 2010. The band is named after the old Japanese label that released bands like Gai, Confuse, and Gess in the early/mid 1980's.
Violent Party is a hardcorepunk band that began during 2010 in Lynchburg, Virginia. The band currently resides in Portland, Oregon.

8 tracks of distorted chaos punk from VIOLENT PARTY.
This is the bands 4th release after 3 previous 7" EP's and is their first full length 12". This is undoubtedly the bands best material to date and unleashes a wave of sonic hate drenched hardcore to the unsuspecting listener.
Drawing influence from Japanese noise punks CONFUSE and STAGNATION in both style and intensity, this is the musical equivalent of electro-shock treatment!
300 copies pressed on black vinyl, split between both labels each side of the pond.
Comes with lyric insert.

Posted by Blitzrecords at 14:38 No comments: