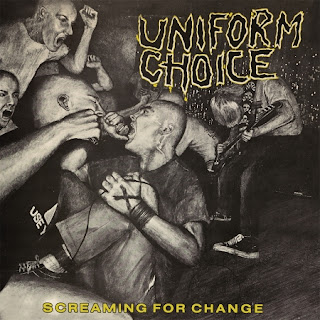 Uniform Choice - Screaming For Change - LP orange vinyl.PRE-ORDER - ON THE WAY TO BLITZ NOW - Limited to 300 copies on orange vinyl - order here at http://blitzrecords.bigcartel.com/One of the greatest American Hardcore releases of the 80s’ gets the deluxe Southern Lord reissue treatment! "Screaming For Change" was the debut album from Orange County, Californias’ godfathers of positive Hardcore: Uniform Choice. It was originally released in 1986 on the bands own label: Wishing Well Records. Vocalist Pat Dubar recently contacted Southern Lord with the desire to have a official re-issue of the classic album “done right”. After several unauthorized, completely sub-par bootlegs appeared Pat wanted a definitive version released to set the record straight!
This essential piece of hardcore history has been remastered from the original tapes by Brad Boatright (Excel, Nails, High on Fire, YDI, Brotherhood). The elaborate packaging includes a 8 page 12”x12” booklet bound into a stoughton tip-on gatefold jacket. There are a ton of amazing, never before published photos from the personal archives of the band and their friends. This is a very special release that is not to be missed!
A1 Use Your Head
A2 My Own Mind
A3 Straight And Alert
A4 Build To Break
A5 Scream To Say
A6 Once I Cry
A7 Sometimes
B1 Screaming For Change
B2 No Thanks
B3 A Choice
B4 Big Man, Small Mind
B5 Don't Quit
B6 In Time
B7 Silenced
Posted by Blitzrecords at 23:59 No comments: 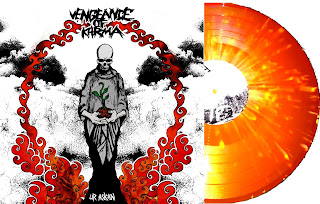 VENGEANCE OF KARMA - Ur Askan LP - yellow/orange splatter vinyl.
IN STOCK - limited to 100 copies mailorder only on yellow/orange splatter vinyl - order here at http://blitzrecords.bigcartel.com/
Debut album from crust / hardcore / d-beat band coming out from Kristinehamn (Sweden) with members from bands like Myteri, Förgiftad or Gränslandet. Vengeance Of Karma started in late 2008 and has released several demos and guested on compilation records around the world. In the beginning it was more a crust band with fast, angry and more raw feeling over the band. Within time Vengeance Of Karma have been going more to an rhytmic and melodic hardcore with d-beat in the ground with some metal influences. The raw feeling is still there but with more atmosphere. Think latest recordings from bands like Martyrdöd, Myteri with touches of classic scandinavian crust bands like Skitsystem or Wolfbrigade. Pressed 500 copies. 400 on black vinyls and 100 on yellow / orange splatter vinyls as a limited edition.
A1 Brända Pengar
A2 För Frusna Intellekt
A3 Skeppet
A4 En Kollektiv Monolog
A5 Kameleonten
B1 Intravenös Terapi
B2 Skicka Vidare Problemet
B3 Själlösa Dockor
B4 Din Hunger, Din Törst
B5 Ur Askan
Posted by Blitzrecords at 23:57 No comments:

Excel ‎– The Jokes On You - LP purple or blue vinyl. 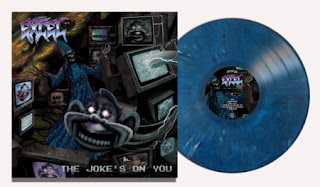 Excel ‎– The Jokes On You - LP purple or blue vinyl.
PRE-ORDER - ON THE WAY NOW TO BLITZ - Limited to 300 copies each on Opaque Purple and Venice Blue vinyls - order here at http://blitzrecords.bigcartel.com/
Originally released via Caroline Records, and produced by Randy Burns (Megadeth, Kreator, Possessed), The Joke’s On You, is the band’s second full-length which saw wide acclaim from thrash, punk, metal and “skate rock” circles (members have been known to have shared a ramp with pros Christian Hosoi, Eric Dressen and Tony Alva). Drawing influence from a diverse range of artists including Black Sabbath, Black Flag, Jimi Hendrix, and early era Corrosion of Conformity, people often talk of ‘crossover’ genres but none quite do it as exceptionally well as Excel.
This reissue, remastered by Brad Boatright, includes the 12 tracks featured on the original CD edition. The closing track 'Blaze Some Hate' was not on the original album (it was released as a 12" single via Caroline) , it will appear on this LP reissue/remaster.
Excel is a now-defunct punk/metal fusion band from Venice, California. The band never achieved commercial success during their years of performing and recording, but they are considered to be one of the first crossover thrash bands to come out of Venice, along with their hometown heroes Suicidal Tendencies. They started in 1983 under the name Chaotic Noise and members at that time were Dan Clements (vocals), Adam Siegel (guitars), Rickey Palamino (bass) and Evan Warech (drums). In 1985, they changed their name to "Excel" and Palamino and Warech left the band since then. Their replacements were Shaun Ross and Greg Saenz.
After releasing two albums, Split Image in 1987 and The Joke's on You in 1989, Siegel joined Mike Muir's Infectious Grooves in 1991. However, during this time, Excel had already started working on new material for what would become their third and last album, but was put on hold several times, due to Siegel's tour schedule with Infectious Grooves. The album, titled Seeking Refuge, was not released until 1995. After that, Excel broke up.

Genre Smashing 1989 Classic Remastered by Brad Boatright & Reissued on Vinyl for the First Time Since Its Original Release Complete with Bonus Track!
The Jokes On You is the second album from Venice, CA thrashers Excel. Originally released in 1989, this genre smashing classic has been remastered by Brad Boatright for maximum head shredding. Contains "Tapping Into the Emotional Void" which was the song that the band took legal action against Metallica for ripping off for the main riff on "Enter Sandman." The Jokes On You came out a full two years before Metallica's Black Album. Painstakingly and lovingly put together by the band and Southern Lord this is the ultimate archival release. Available on vinyl for the first time since its original release complete with the previously unreleased bonus track "Blaze Some Hate." A must for fans of the current wave of crossover: Municipal Waste, Power Trip, Toxic Holocaust as well as old-shook fiends into Suicidal Tendencies, The Accused, and Corrosion of Conformity.
A1 Drive 2:25
A2 Shadow Winds 4:17
A3 Fired (You're) 3:14
A4 Tapping Into The Emotional Void 4:18
A5 Affection Blends With Resentment 3:53
A6 Sealing Insane 3:15
B1 My Thoughts 3:18
B2 I Never Denied 5:14
B3 Message In A Bottle 2:49
B4 Given Question 2:53
B5 The Stranger 3:46
B6 Blaze Some Hate
Posted by Blitzrecords at 23:55 No comments: 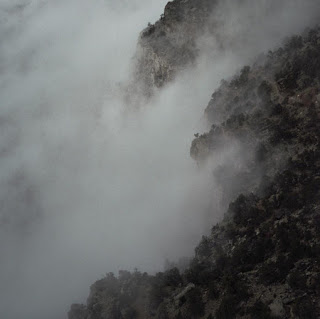 Like Rats ‎– II - LP clear vinyl.PRE-ORDER - ON THE WAY TO BLITZ NOW - Limited clear vinyl - 300 copies only - order here at http://blitzrecords.bigcartel.com/LIKE RATS feature members of Chicago power-violence legends WEEKEND NACHOS. This LP compiles every filthy fucking note they have ever recorded. Most importantly it features their brand new album “II”. NACHOS have spawned a different beast with LIKE RATS. The focus of the beatdown is heavily death metal influenced with generous helpings of caveman swing. Think of the old school slaughter of Celtic Frost, & Obituary with the modern ass kicking of Nails, Black Breath etc..
Riff worshiping posers need not apply.
1 From Beyond
2 Primordial
3 Gates
4 Pandemic Of Fear
5 Dissociate
6 Evil Winter
7 Immortal Coil
8 Grief Incarnate
Posted by Blitzrecords at 23:54 No comments: