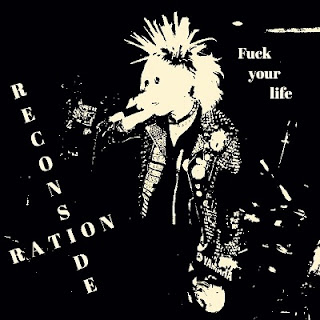 SOLD OUT
CONTACT ME HERE FOR AVAILABILITY  blitzmike@hotmail.co.uk  OR USE THE CONTACT BOX AT THE BOTTOM OF THE PAGE AND I'LL EMAIL YOU A TOTAL.
Limited 300 copies, sold out in Japan - STRICTLY ONE PER CUSTOMER;
Pre THE TITS band RECONSIDERATION now defunct Tokyo noisecore band, active between 2013 and 2016 with The Tits front man Kyosuke , this 18 track CD of unreleased material is self released on the The Tits/Kyosuke's label TTRECORDS.
Formed in 2013, the noise core band "RECONSIDERATION" in which the current THE TITS / Kysuke was enrolled and active! Released an unreleased sound source CD from the independent label TT RECORDS sponsored by THE TITS / Kyuke !! All 18 songs included! ! (Number of songs included in the CD) Normal Edition CD (CD only) 300 sheets, Limited Edition CD + TAPE 200 sheets (Reserved sold out!), 500 total press! CD jacket design differs between Normal Edition and Limited Edition !! (* The content of the CD itself is the same.)
Isn't the noise core revival happening in 2020 by the end of 2019 when only a few remain in 2019?
Such a project jumped into the arrow at the point where I was talking about laughter. The RECONSIDERATION of the Tokyo punk scene was born in 2013, and the period was celebrated in just two years.
We have caught the information that they will finally drop the big bomb they have been hiding for years into this punk world!
That's RECONSIDERATION, a completely unreleased soundtrack “FUCK YOUR LIFE” release! ! Do you remember the Crazy Noisy Dangera Spanker Group, which was currently active before THE TITS / Kyusuke (the nickname was CHAOS.K.) Before the formation of THE TITS! ? The musicians who appeared like a comet, scattered the topic confidently, and left a work of one hand for a short period of time.
Punk fashion like a model that inherits the 80'S, and unusual hairstyles that were natural at the time of the activity. The original sound, which was greatly influenced by the noise cores of Great Britain and Kyushu Island, has left unmistakable facts that captivated many punks of all ages. They also stopped working after overheating due to questions of youth and presence and masochistic runaway contradictions. With a little time, they disappeared from the punk scene with no stubborn fragments. This work is another take of MORE NOISE (cassette tape), which was sold only 50 pieces at the live venue at that time!
Herahervois of CHAOS.K., Who was god-hungry, is quite cruel when listened to again now, and this sound source also vigorously appeals for himself.
Psychedelic mokomoko bass by Yossy the vincent, who is very important for the band, is alive in this work. Punk attacker SAVEX's noisy noise cicada guitar's response is outstandingly chaotic and comfortable throughout. YADON's speed drum, which runs at an improbable speed, often causes abnormal situations due to miraculous products far beyond common sense. Like MORE NOISE tape which is difficult to obtain (the order of songs is changed) The place where that pop and dope opening and ending are recorded firmly is the best in Funny! We were planning to release it with a conscious, good-sense title called “FUCK YOUR LIFE”, but unfortunately it didn't happen at the time. And this work includes a treasured sound source that has never been publicized as a bonus track! ! The ultimate material that will be recorded in a few months after the work introduced above and will be the first to be released in Japan with a very repertoire of live repertoire songs. If this sound source had been released at that time ... Intense Six Sex Trax that would surely turn history! It is no exaggeration to say that the killing and anxiety of the members who could not help without Yasagure had a bad influence on the sound due to the burning feeling near the suspension of RECONSIDERATION activity. This is a phantom damaging sound source! ! Anyway, we want you to fully enjoy this special mad punk performance sound source. This is a very important work that can be reconfirmed again with the pure noise core punk band called RECONSIDERATION, which shines but fleets.
An absolute punk sound source dedicated to innate punks around the world, given by THE TITS / Kyosuke's independent label TT RECORDS! !
Expect the first-time people, of course, to beg for unparalleled noise core fans and geeky people who grew up in the Kyushu Violent Party!
Finally, the big news that jumped in at the end of the last year of 2019 are the UK's Noise Core Big Three CHAOTIC DISCHORD 2020 summer & winter reunion live decision secret story, and
another .....
shimokitazawa killers INOUE
Posted by Blitzrecords at 04:04 No comments: