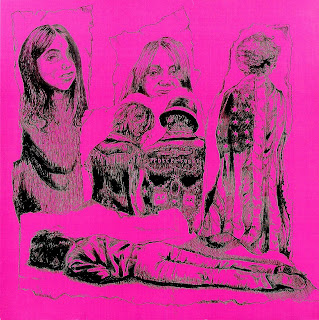 Here is the 2nd EP from Toronto's School Jerks and one of my favorite bands going right now easily. This one is 1 song more than the debut on Riff Raff, & also a lot more loose and raw than its preceeding record. Comparisons to the Regulations occur to the feeble minded. Personally I don't hear it, the guys think maybe Amdi Petersens Arme is the only modern band they maybe could be compared to which I agree with a little bit but I most certainly do hear 'Inside my Brain' era Angry Samoans and 'Jealous Again' era Black Flag moments from this band though its def not a shallow ripoff band either. These former Terminal State alumni dip into inspirations you'd not guess and still do all the right things a true punk band would & that's all that matters here. This is essential if you're a fan of the early 80's SoCal sound from the LA area, not OC! Pink covers with a cool Easy Rider/Charles Manson inspired art piece for the cover & a typewriter font stamped sticker on the polybag with an insert for some of the 2nd press copies (about half of the copies are like this where the other half have no stickers or inserts). Confusing? Yes!