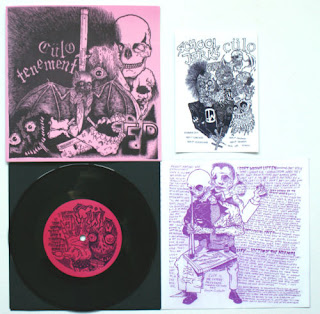 Yup,, Culo and Tenement did a split. I am sure diehard fans of either band won't get why these 2 bands did a split but in reality they're kindered spirits. And plus its a pairing of 2 of the midwest's BEST on 1 7'' platter. Tenement do 2 insanely catchy indie flavored but also heavy midwest punk tunes and Culo drops 4 more classic HC punk on your head. Songs on this are exclusive to this split. This is totally not at all a throw away record either just because its a split so you can throw that superstition out the window. Housed in a color cover and with black dust sleeves, this is seriously a nice looking record. Yeah this also isn't a cheap record, but the fact its a 1 time deal of 500 records and the extras that came with it and everything else, these cost $4.25 AT COST just to break even so if you don't like it don't buy it! - NickSick - Cowabunga Records. 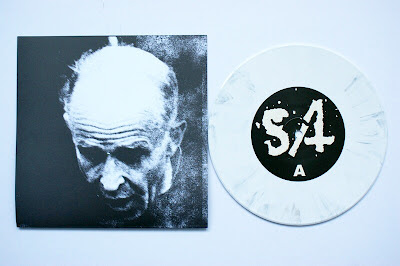 Brand new EP from this 1/2 Dekalb and 1/2 Chicago grind powerhouse! Been over a year and almost 2 years since the LP was recorded for but these tracks were put to tape in spring and they had enough for 2 EP's, I got the 1st one of the 2. Andrew of Weekend Nachos recorded them this time instead of Kris Poulin and I think Andy has a better understanding on how this band should sound. Its louder, raw and the intensity is in your face. Corny way to describe this? Sure, but you know what? I think its fitting. 7 tracks and also on this one they got another hell of a raging good midtempo breather song that goes for a Today Is the Day meets Buzz.oven sort of thing and they still hit the speed factor to keep it from being a total buzzkill, no pun intended! I hate saying this still and I think they're bored of it by now but Adam was the 1st Weekend Nachos drummer (demo up to the split w CBS) and Kirk was in MK Ultra, who was always one of the few 90's HC local bands I ever liked. Cover art done by Alex of White Walls if you need to know who came up with that, Mr McCoy did the logo which adorns the back cover (and has resurfaced on each release since the demo). Here is the LIMITED Mailorder version! 100 were done on WHITE/BLACK wax Blend and I have 80 copies,, its basically GREY wax with slight WHITE swirls, these actually look pretty damn cool. - NickSick - Cowabunga Records. 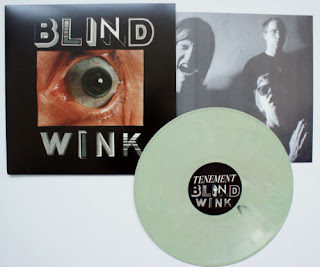 To be honest, I am proud of 90% of the music I've released to date. I'll admit that other 10%, yeah these are what I've realized to be bad calls that I've kind of come to regret in a number of ways that will remain unmentioned, but this is one of my favorite records I've done and it was done by my favorite current band. It's NOT HARDCORE so I will just say that now. You only want super fast and have a closed in mind, you'll def not enjoy this. The band plays catchy punk but it's not pop punk. It's indie rock influenced but not indie rock. I can't describe this band exactly as its so spread out except they play their style extremely well and their songs stick in your head from one to the next. The sound they have now is a bit different from where they started. At 1st they had a Dinosaur Jr heaviness done to a Greg Ginn riff feast, a Husker Du wall of sound all crossed with a Descendents catchiness sort of way to their music. And yes, all of that still applies to the band to a degree but they incorporate more middle era Beatles, soul, early Kinks and post Let It Be later Replacements to the mix and that's Tenement's latest masterpiece. 11 stellar songs (the 1st 6 appeared on the rough mix tour tape release 'the Blind Wink' last winter) mastered by their guy Justin Perkins who's worked the knobs on the majority of their records. I would highly suggest this to those who actually listen to what I would consider good music as well as punk in general. My gushing aside, there is color vinyl for the collector scum and 100 copies as usual are available! - NickSick - Cowabunga Records