The Outcasts - Self Conscious Over You - 7" 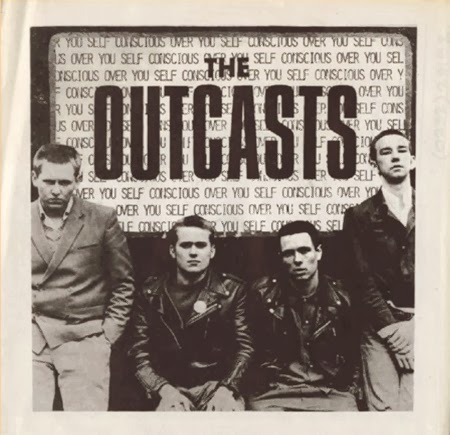 The Outcasts were formed in June 1977 in Belfast by the three Cowan brothers, Greg Cowan (vocals / bass), Martin Cowan (guitar/vocals), Colin Cowan (drums) and their friend Colin ‘Getty’ Getgood (guitar), playing their first gig two months later. ‘You’re A Disease’ / ‘Don’t Want To Be No Adult’ / ‘Frustration’ (It, 1978) is easily the roughest sounding early Outcasts single, ‘You’re A Disease’ stands out as the best track. ‘Frustration’ was later re-recorded for the 1982 LP ‘Blood & Thunder’. ‘Just Another Teenage Rebel’ / ‘Love Is For Sops’ (Good Vibrations, 1978) captures the Outcasts at their best, punk rock with a pop edge, both tracks are classics. Came in the trademark Good Vibes foldout poster sleeve in several different colours, a 2nd pressing was issued in early 1979 with a different cover. ‘The Cops Are Comin’ (Good Vibrations, 1979) was released as part of a double single package ‘Battle Of The Bands’ featuring three other local bands, namely Rudi, Spider and the Idiots. A nasty little tale about killing your girlfriend and having sex with her corpse.

Excellent condition - WILL BE SHIPPED BY REGISTERED POST
https://blitzrecords.bigcartel.com
Posted by Blitzrecords at 13:48 No comments: