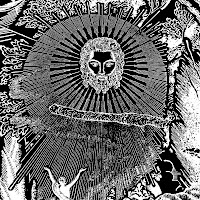 RARE WHITE WAX 7" LIMITED TO 100 ONLY--LONG OUT OF PRINT
Demo 7" from NYC hardcore band NOMOS, originally issued as a run of 100 cassettes, now seeing a release on vinyl. Six songs in under nine minutes. Influenced equally by early 80's rippers like Poison Idea, Void, and Antidote and early 90's hardcore such as Citizen's Arrest, No Comment, and Infest. Recorded by Will Killingsworth at Dead Air Studios and featuring artwork and layout by Vincent Smith. Bringing to mind CITIZEN'S ARREST and post-Disassembly Line CAPITALIST CASUALTIES both via the present in terms of songwriting, with abrasive shouted vocals, a scuzzy bass tone, a thick guitar sound, and everything recorded in the red for the perfect distorted grate.


Posted by Blitzrecords at 02:36 No comments: 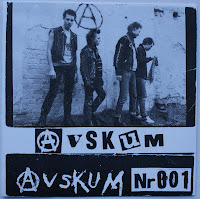 Vinyl pressing of Avskums original 1982 Demo tape. No one could makeout or remember the lyrics, so there's photo's from the original photo session and 12 tracks of raw, crude Swedish hardcore bashing, remastered by George Horn.

Very limited pressing and already out of print.


Posted by Blitzrecords at 12:52 No comments: 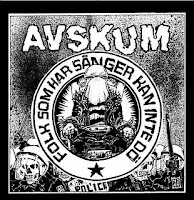 A-Side features 4 new tracks from Avskum in the vein of their most recent LP "Uppror Underifran" blasting Swedish hardcore, fueled by by sturdy D-beat bashing and harsh vocals. Flip side is two re-worked versions of tracks from "Crucified By The System" features guest vocal from Diana of Shades of Grey. Recorded at Evil Grille, art by Crash Mange. First press limited to 600 copies on clear vinyl.


Posted by Blitzrecords at 12:21 No comments: