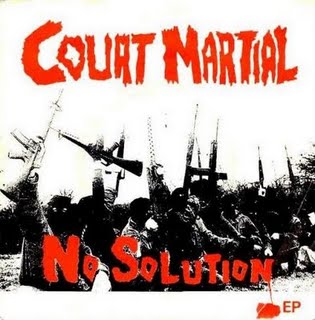 Riot City Records – RIOT 11 Released:1982
A No Solution B1 Too Late B2 Take Control
They were formed first in 1979. in Bristol,UK.Their first name was The Zeds,untill Ian McPherson replaced John on drums and the band changed the name in Court martial.Line up:Alex Burroughs-vocals,Simon Burroughs-lead,vocals,Ian McPherson-drums and Richard Braybrooke on bas.They fprmed the band when they were still in school.Their influence come fromearly punk bands like Sex pistols,The Clash.First gigs they played in local youth clubs in Bristol.In 1982.they supported band The Vice Squad and shortly after they recorded demo single and got signed with Vice Squad’s label Riot City Records. 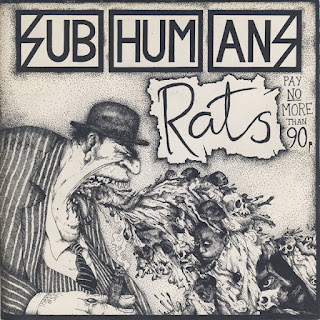 Bluurg Records – fish 10 - Released:1984
Skull Side A1 Joe Public 2:08 A2 Labels 2:16
Bluurg Side B1 When The Bomb Drops 3:11
B2 Rats
An anarcho-punk band formed in Trowbridge, Wiltshire, UK in 1979 by Dick Lucas, who had formerly been in local bands including The Mental and Stupid Humans. The band released a demo in 1981 which was heard by members of the band Flux of Pink Indians after being sent to them by Graham Burnett of New Crimes fanzine, who were so impressed that they offered Subhumans a chance to put out a record on their newly-formed Spiderleg label. Shortly afterwards the Subhumans began to release material on their own Bluurg Records label.
After Subhumans split up, Lucas formed the bands Culture Shock and Citizen Fish. The Subhumans reform for live performances, including at least two major tours of North America in the 21st Century, (Live In A Dive is a product of the first) and they continue to command a strong following. Subhumans are known for their thought-provoking, anarchic lyrics.


Posted by Blitzrecords at 11:25 No comments: 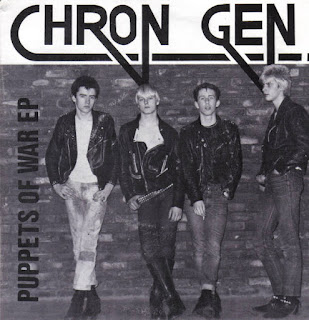 With the Succes of the EP led to an invitation to join The Exploited, Discharge, Anti-Pasti, and The Anti-Nowhere League to go to the now infamous Apocalypse tour that rampaged through the UK in the summer of ‘81. On a sadder note, Floyd (one of the later members of the group) died October 31, 1999. 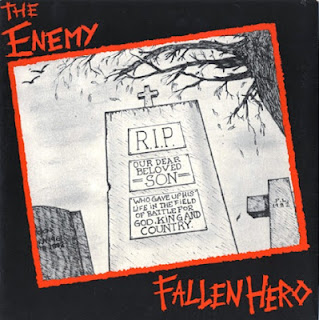 The Enemy – Fallen Hero Fallout Records – FALL 001  Released:1982
The Enemy formed in early 1980 in their local youth club, with several changes of personnel before they stabilized the following year as Mark Woodhouse (vocals), Steve “Mez” Mellors (guitar), Steve O’Donnell (bass), and Mark Herrington (drums). They played their first gig at Woodlands Youth Centre, and landed a support slot on Anti Pasti’s gig in Huddersfield. They recorded their first single, “50,000 Dead” at Old Cottage Studios in Derby, releasing it on their own Tin Tin label. The single was quite successful and led to the band being signed to Fall Out Records, debuting on the label with “Fallen Hero” in May 1982, which reached number 44 in the UK Indie Chart. “Fallen Hero”, an anti-war song, was also included on the Punk and Disorderly volume 2 compilation which reached the indie top 10. The band’s third single was less successful, and Mellor was replaced by Kevin Lamb of local punk band Total Loss, who livened up the band’s live performances.

Debut album Gateway to Hell was issued in 1983 to much critical acclaim and respectable sales. Herrington left the band before the album was released, to be replaced by Dave Hill. The band toured around Britain in support of the album, but were dropped by Fall Out, and moved to the local Rot label (run by Riot Squad’s Dunk) for their next single, “Last But Not Least”, which was followed by an album of the same name (now featuring a fifth member, lead guitarist Phil Maw), with tracks split between a live recording from The Bierkeller in Leeds and studio tracks recorded at Cargo Studios in Rochdale. The album turned out to be The Enemy’s final release, with disappointing sales and musical differences prompting the band to call it a day.


Posted by Blitzrecords at 05:06 No comments: 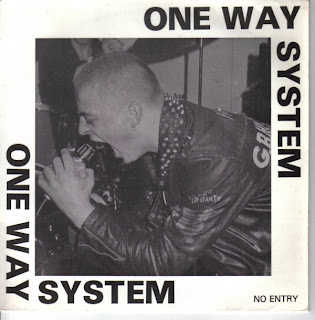 One Way System – No Entry

Lightbeat Records – WAY 1 Released:1982
One Way System first lit up the second wave punk revolution with their fresh faced, no nonsense sound in the early eighties, when Oi! and skinhead culture had all but rejected the original punk ethic. One Way System managed to bridge the gap. From the front cover of Sounds to the Olympic Auditorium in Los Angeles, the System remained sharp and impressive, their natural aggression and un-faulting professionalism sealing their reputation as one of the most exciting bands on the international punk circuit. The ‘comeback’ gig at the 1996 Holidays In The Sun festival only proved that One Way System are still a force to be reckoned with. A year later they were taking Japan by storm. A new millennium has rolled by and One Way System still impress. Touring Europe and the USA. Playing to enthusiastic crowds they remain as hard hitting as ever. 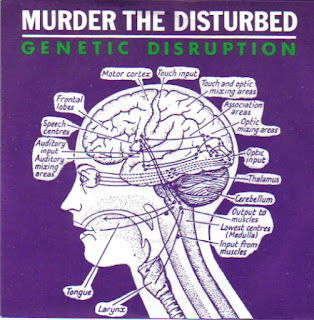 Murder The Disturbed – Genetic Disruption Small Wonder Records – Small 17
Released:1979
Murder The Disturbed were signed to the short-lived, London-based Small Wonder Records. This is the very same label that released the debut singles, and in effect launched the careers, of some of indie music’s most legendary acts – a list that includes genre-defining artists such as Bauhaus, The Cure, and Crass, as well as lesser known artists like Patrik Fitzgerald, Cravats, Demon Preacher, and Poison Girls. Interesting enough?

Stylistically, Murder The Disturbed fit in quite well on Small Wonder’s roster. 1979’s Genetic Disruption is as worthy a debut as any – chalked full of moody minimalistic postpunk, it has a sound so primitive you might be tricked into thinking that the band were actually some obscure krautrock sensation dowsed in proto-punk voodoo. Good stuffs. Many thanx to Lifeonthedot. 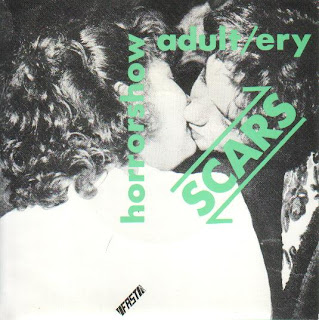 Scars – Adult/ery / Horrorshow Fast Product – FAST 8  - Released:1979
Scars (originally known as The Scars) were a post-punk band that hailed from Edinburgh, Scotland, and were a part of that city’s bustling music scene of the late 70s - early 80s. They released number of 7“‘s from 1979 - 1981 and in 1981 they released their one and only album Author! Author! They have also released a live album from 1981 Scars Live Valentino’s Edinburgh Sunday June 21 1981
Scars did their first gig in December 2010 in Edinburgh after an absence of 25 years. They also played a live session in February 2011 for Marc Riley on BBC Radio 6 Music
They are currently working on a new album to be released in 2012