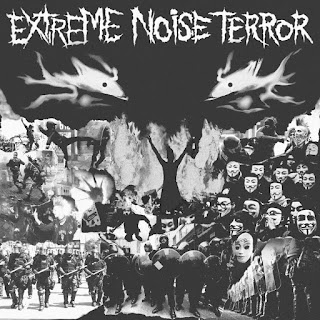 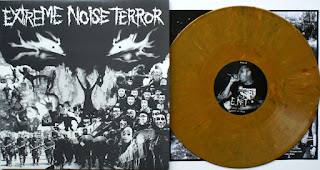 Extreme Noise Terror - Extreme Noise Terror - LP colour vinyl.
VERY LIMITED MAILORDER ONLY 'SUNBURST' BROWN/YELLOW/RED VINYL - available at - grab a copy https://blitzrecords.bigcartel.com
U.K.'s legendary crust-punk grind legends Extreme Noise Terror return with a new full-length! Heavy-ass-f*ck and pissed off grind is what defines the ENT sound, and this album further cements their status as the reigning kings of the crust-punk world. Includes OUTO cover of "I Like Cola" mailorder limited wax available.
Among the kings of the late '80s UK hardcore scene, EXTREME NOISE TERROR, indisputably deserve their name to be written in big black capitol letters. After speeding up, together with Napalm Death, Doom, Hellbastard and the likes, what Discharge created back in the early Eighties and inspiring a whole generation of crust bands, EXTREME NOISE TERROR are back in 2015 with a new full length recorded last year. It's hard to believe this new masterpiece doesn't come from the same 1991 sessions as this is totally Phonophobia-core. This new self titled record sounds exactly as the old E.N.T. tunes we all fell in love with, so what you have to expect is the usual overdose of throat-cutting double vocals, thrashy heavy rotten sounding guitar riffs, helicopter-ish bass and turbo aggressive fast beats. For those who still don't believe it, I'm reporting what Dean Jones wrote us introducing the record: "The new album is back to total old school ENT (Earslaughter, Holocaust, Phonophobia) No Metal, No Blasts. Total pure ripping, ultra fast H/C Punk the way it originally was". And this is what their new singer Ben wants to state about his feelings towards the record: "I was a big fan of ENT as a teen, long before I joined, specifically of A Holocaust In Your Head and Phonophobia. If I was going to compare this new album to anything the band’s done before I’d say it sits nicely with those two. Catchy as fuck aggressive ultra hardcore punk riffs, fast frantic drumming and mental vocals; I don’t think Dean’s ever sounded as insane as he does on this one! It’s raw as fuck too, no click tracks or fixing-in-the-mix type shit, instead the drums, bass and guitars were done live with the leads added after and me and Dean sharing a mic going through a 76 year old analogue valve amp. We’re all hugely proud of this album, its a proper call to arms and a brutal statement that the band’s music and message is every bit as relevant today as when it was formed 30 years ago”. This record is totally in memory of their beloved singer Phil Vane who sadly passed away in 2011. Rest In Peace Phil and long live EXTREME NOISE TERROR! 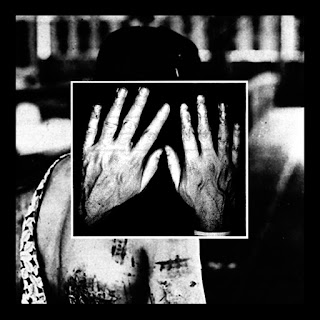 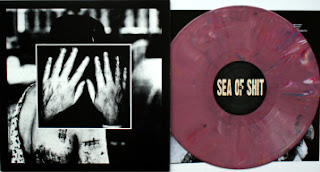 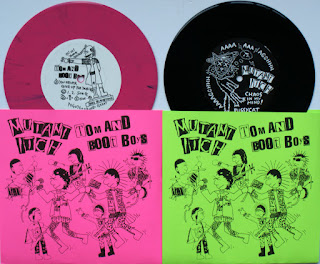 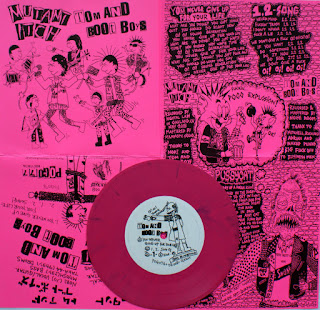 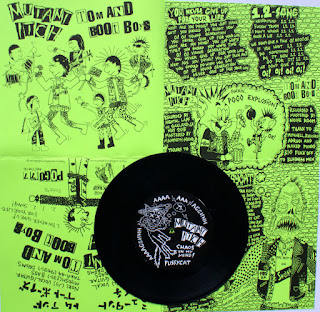 
"Long time Japanese pogo punk veterans Tom and Boot Boys contribute 2 tracks. The first being an all out hardcore assault while the second being a more traditional 1-2,1-2 bounce up and down number. Brilliant stuff. After 2 demos and a 3 way split tour tape Mutant Itch from Fresno,CA give us 2 tracks of their brand of noise punk insanity. Noisy noisy stuff but with a certain groove that also makes it super catchy!!!! Pretty cool lyrics to boot! Very cool outside(Nori/TABB) & inside(Gurpaul/Mutant Itch) artwork.
A1–Tom And Boot Boys - You Never Give Up For Your Life
A2–Tom And Boot Boys - 1,2 Song
B1–Mutant Itch - Chaos In My Mind
B2–Mutant Itch - Pussycat
Posted by Blitzrecords at 13:52 No comments: