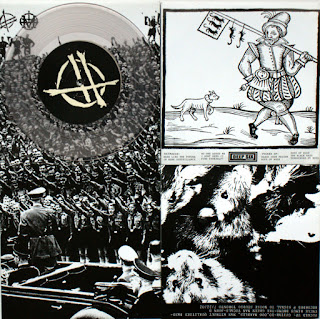 Fucked Up - To my mind this is one of the best punk bands of the 21st Century thus far. The simple catchy songs strike me as being far deeper than they appear on the first listen. The band employs a stripped down "less is more" approach that is three steps ahead of most hardcore punk bands today. The end result are songs that work on several levels at once, manifesting themselves both as "thinking man's hardcore" and circle pit instigating ragers at the same time.
Haymaker-- the same old Haymaker - mean and heavy -five tracks of tough guy hardcore from the masters of bad attitude. Like a cornered rat Haymaker are set to fight to the death. Prepare to be bludgeoned by angry, bitter, and hateful songs that have no finesse, no hidden agenda, no subtleties, and no mercy. Just pure ugly and hateful hardcore. Awesome.
-Fucked Up Black Iron Prison
–Fucked Up Dove Of Wood
–Fucked Up The Black Rats
–Fucked Up Surrounded By Boys
–Haymaker Here Lies The Future
–Haymaker In Home Surveillance
–Haymaker No One Asked Me
–Haymaker I Don't Need It
–Haymaker Find Yourself?
Posted by Blitzrecords at 15:46 No comments: