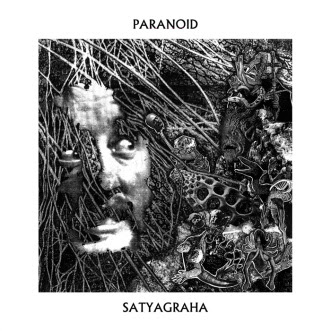 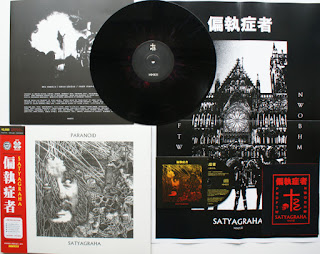 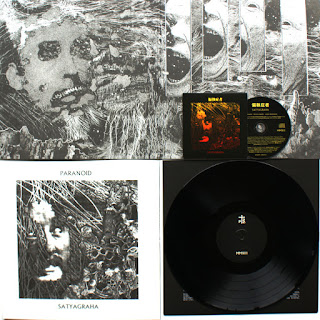 偏執症者(Paranoid)-Satyagraha 12"
IN STOCK NOW - another superb package from these guys - very limited stock available - this is the USA only version from the legendary Konton Crasher Label with gatefold cover and printed inner sleeve, plus CD version - great price on these, would cost you $40 (£27.00) from the US. - another superb release from my good friend Gaki. - secure your copy here - - https://blitzrecords.bigcartel.com
Northern Winds of Brutal Hell Mangel.

400 black vinyl, printed inner sleeve, gatefold jacket, CD
version included.
Also extremely limited SPLATTER VINYL (very light red splatter on black vinyl) with patch, poster, obi, printed inner sleeve, gatefold jacket, CD version included.
Satyagraha starts off with some lingering noise and ambient sounds before launching right into its abrasive assault. It’s clear right from the start that this album is focused on hitting listeners with some of the noisiest guitar riffs around, and that’s what made it instantly appeal to me. 偏執症者 (Paranoid)’s song patterns may be familiar, as they pull from the D-beat pattern frequently and have aggressive riffing and pounding drums that don’t let up for a single second. But they do it really well, and behind the sheer abrasiveness of the recording there are plenty of catchy riffs that will make you want to crank the volume up and run around with your fists in the air. There are plenty of bands going for this particular style as D-beat and punk of this type regularly have new acts joining the fray, but it’s a bit rarer to have it offer memorable riffs and standout songs alongside the sheer wall of energy. But what’s most surprising about Satyagraha is the way it ends. You get nine tracks of intense instrumentation and catchy leads that all span around two to three minutes a piece before the final song heads off in a completely different direction. Spanning five and a half minutes, the last track on the album takes the foot off the gas in favor of a haunting keyboard melody. It’s an unexpected way to end, but it feels like the instrumentals are channelling the aftermath of the destruction the rest of the material left in its wake and proves that these guys might be thinking just a little outside of the box compared to some of their peers. When the noise level is this extreme on a punk record of any kind, the vocals have a tendency to be buried underneath the dense wall of sound. But that’s actually not the case here, as even with the ear shattering tonality of the guitars the drums and vocals stand are near the front of the mix and dominate just as much of the spotlight. I’m not sure which of the three members contribute vocals or if all three of them do in some capacity, but there’s quite a bit of variation between screaming and growling that gives the material some additional depth. What I like the most is that the band likes to use the high/low pitches in tandem with each other, giving off that towering presence that works so well for this particular type of music. As with the instrumental work, the screams and growls are unrelenting the entire time through and do their best to grab you right by the throat every single second. I’m a big fan of any punk/D-beat that’s capable of offering both absolutely punishing tonality and instrumentation mixed with some catchy riffing, and that’s exactly what 偏執症者 (Paranoid) has been able to do on Satyagraha. The guitar attack with the force of a buzzsaw and up the noise to its maximum level, and it’s some of the sickest, dense material of this type I’ve heard this year next to Napalm Raid. But there’s also a hint of some softer experimental elements at the end that fit thematically with the rest of the record, and that’s a sure to help this band stand out a bit from the rest and leave them with plenty of room to branch out should they choose to do so. The bottom line is, if anything D-beat related grabs your attention you shouldn't miss out on Satyagraha. - massive thanx to Chris Dahlberg at http://www.cosmosgaming.com/…/music-re…/paranoid-satyagraha/
https://www.youtube.com/watch?v=5D6kWQa6Nbw
https://www.youtube.com/watch?v=0Jcl0XA4VqM
A1 Kaihou A2 Kenzennaru Seishin Houkai A3 Umerarenai Fujyun A4 Bouryoku A5 Nangijala (Shigo No Sekai) B1 Shisuru Sekai, Iki Jigoku B2 Shihaisya B3 Kyogi Sakuryaku B4 Chinurareta Tousou B5 Hi No Naka Ni Sõgi
1 Kaihou
2 Kenzennaru Seishin Houkai
3 Umerarenai Fujyun
4 Bouryoku
5 Nangijala (Shigo No Sekai)
6 Shisuru Sekai, Iki Jigoku
7 Shihaisya
8 Kyogi Sakuryaku
9 Chinurareta Tousou
10 Hi No Naka Ni Sõgi

Posted by Blitzrecords at 02:46 No comments: 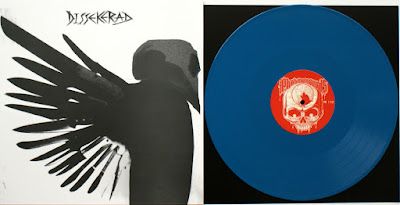 Posted by Blitzrecords at 15:40 No comments: 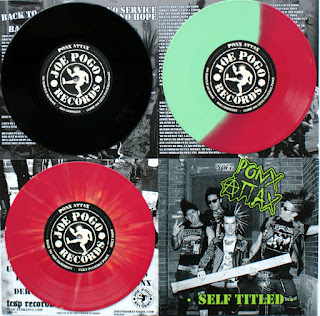 PONX ATTAX - Self Titled - 7" colour vinyl.IN STOCK NOW - grab a copy here it's incredibly limited https://blitzrecords.bigcartel.comGreat stuff, back to the '82 No Future label days for me.100 copies - black wax150 copies - 1/2 and 1/2 wax
250 copies - splatter wax
https://youtu.be/7oT_qFJ6FkI
Ponx Attax, are a bunch of drunk punks out of Saint Paul, Minnesota who live, love and play punk-fucking-rock, what else is there to say? Up the Ponx down the beers.
Posted by Blitzrecords at 10:34 No comments: 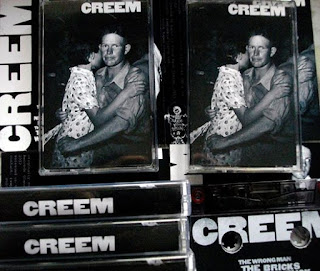 
Recorded and released in 2012 as 12" EP (its long gone from Deranged Rcs and Katorga Works who released it) and reissued as cassette now. NYC hardcore punk band CREEM influenced by 80's Boston hardcore and UKHC including members of Ajax, Natural Law, Nuclear Spring, Warthog, Concealed Blade, Hounds of Hate and many others. If you missed the EP, heres a kinda replacement, so dont sleep.
https://youtu.be/kv0ghOKVm1k
A1 Think Twice
A2 Lucid
A3 Never End
A4 Dweller
B1 The Bricks
B2 The Wrong Man
B3 What The Fuck
Written-By – Black Easter
Posted by Blitzrecords at 04:01 No comments: 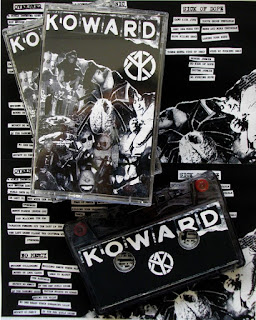 
https://youtu.be/aZWCUo8Nwc8
This EP was recorded in 2010, originally released by Total Fucker from Boston, and for now the band is divided by East and West Coasts but is still going. Raging d-beat hardcore as its best, Discharge meets Totalitar with some 80's USHC tunes. Members of Scapegoat, PMS 84, WKSJ?, Earthpig, Contingent, Sadist, 2x4, Terokal and many others!
1 Overbred
2 Worldwide Panic
3 Sick Of Dope
4 No Mercy
5 Nightmare Man
Posted by Blitzrecords at 03:59 No comments: 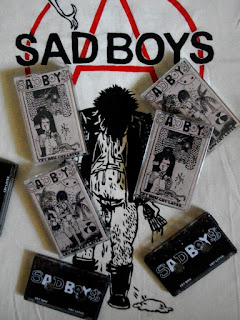 
https://youtu.be/Sov9jRHePI8
A1 Cry Now, Cry Later
B1 I Am Not A Girl
B2 Turds On A China Plate
Posted by Blitzrecords at 03:55 No comments: 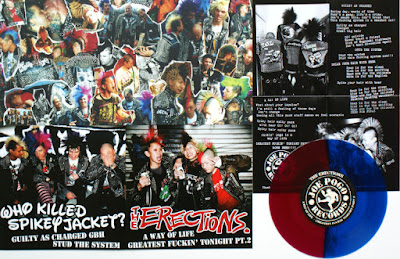 Who Killed Spikey Jacket?/The Erections Split 7" colour vinylBACK IN STOCK NOW - very limited and already out of print - grab a copy at https://blitzrecords.bigcartel.comBlue and Red vinyl {1/2 and 1/2} limited to 200 copies for mail order only - also red vinyl limited to under 150 copies - with lyric insert.A1 –Erections, The A Way Of Life A2 –Erections, The Greatest Fuckin' Tonight Part 2
B1 –Who Killed Spikey Jacket? Guilty As Charged GBH
B2 –Who Killed Spikey Jacket? Stud The System
Boston pogo punk attack for all who's into Japanese classic pogo bands (Discocks, Tom and Boot Boys, Pogo Machine, Shit-Faced etc), UK82 and the best 90's street punk bands!
Chaotic street punk that blends UK 82 era Oi and punk together. These songs are snotty and snotty and shambolic, but catchy and unapologetic. Defiantly two fingers in the air punk rock - check 'em out --- -
https://youtu.be/VBJNRM08HZY
Posted by Blitzrecords at 09:37 No comments: 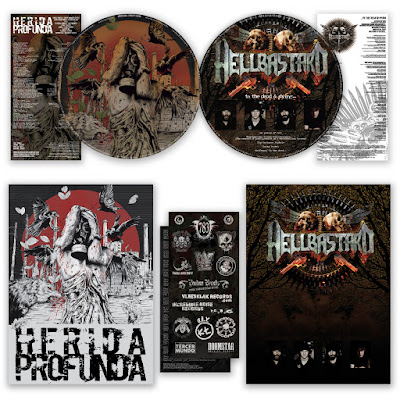 HERIDA PROFUNDA / HELLBASTARD split picture LP screen print cover'
PRE-ORDER - HERE IN A FEW WEEKS - I have 3 copies only if you want to grab one here https://blitzrecords.bigcartel.com
This is one of the first 200 copies come with a special cover by Gravelord Artwork and screenprinted by Rozbrat Squat DIY Crew.

Posted by Blitzrecords at 01:32 No comments: 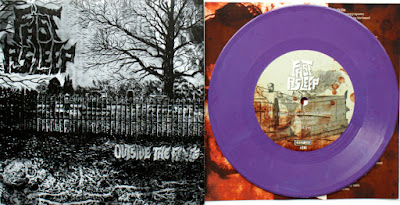 Fast Asleep - Outside the Fence 7" purple vinyl.
IN STOCK - consume large amounts here - https://blitzrecords.bigcartel.com
They say good things come to those who wait and the new EP, Outside the Fence, by Fast Asleep is certainly no exception! With the addition of a new drummer, these Santa Cruz skate punks have recorded 8 new grinding jams. The lyrics branch out a bit more on this one and explore things like serial killer karma, corporate waste, and eminent death. Fans of early West Coast thrash and PV will be circle pitting in their bedrooms no doubt. If you ever fancied old C.O.C., Pissed Happy Children, Cryptic Slaughter, Jenny Piccolo, or early D.R.I. then this shit is for you! .  Limited wax preorder now!
Posted by Blitzrecords at 03:27 No comments: