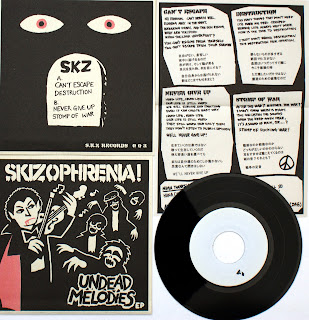 CONTACT ME HERE FOR AVAILABILITY  blitzmike@hotmail.co.uk  OR USE THE CONTACT BOX AT THE BOTTOM OF THE PAGE AND I'LL EMAIL YOU A TOTAL.
Punk band from Tsuyama, Japan - Not sold outside Japan, white label with different colour cover from USA version - Comes with a folded paper insert, Side A is stamped with a black "A" on the centre label.
A1 Can't Escape
A2 Destruction
B1 Never Give Up
B2 Stomp Of War
Posted by Blitzrecords at 12:09 No comments: 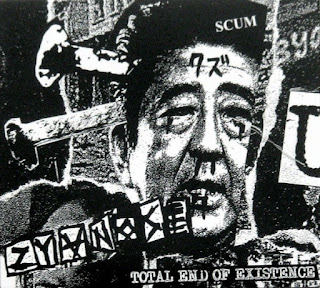 CONTACT ME HERE FOR AVAILABILITY  blitzmike@hotmail.co.uk  OR USE THE CONTACT BOX AT THE BOTTOM OF THE PAGE AND I'LL EMAIL YOU A TOTAL.
Self released CD - Japanese noise-punk / hardcore band from Osaka.
The energetic activity is the same in the release as well as the discography CD from the end of last year, the compilation, the release of the latest work”chaos Bender"in various formats, and the end of the EP SPLIT with ENZYME in Australia that will be released soon, what do you think?Released the final full album in 2019!
Recorded in the best and sickest condition ever recorded, ZYANOSE's ultra・nautical crusher noise・crust is the first of its kind in the group'S AspectJ ERA. this is the first time I've ever heard of this sound, and it's the first time I've ever heard of this sound.！
Slushy, dirty, RAW, and with a lot of venom to the end, a new song that unfolds only if you don't know what the listener is?Old song remake?This is the culmination of a total of 13 TRACKS that ZYANOSE has released!
It is also a must・see sleeve artwork too Yaba that incorporated the criticism of the system that was finished with all members!
The end that makes you feel no end is the real end?THIS IS THE TOTAL END!！
Tracklist
1 ...And Learn Respect
2 Nazi And Ignorance
3 Blinded Reality
4 Gggggg
5 Silence II
6 Ghost Of Past
7 Last Statement
8 Toubou
9 Parasite
10 I.N.R.D.D
11 Gluttony
12 Red Dyed Sky
13 Self Control
Posted by Blitzrecords at 12:07 No comments: