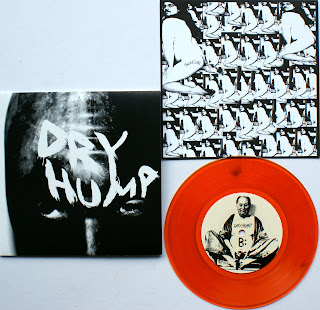 A band hard to describe to people. I see sometimes where someone without a brain calls them 'generic' but I fail to see it. To me its maybe a little simplistic, but its done so well and there's just something on the brink of genius about these depraved and disgusting lyrics. Maybe because it speaks my language? Who knows for sure, but these Lowell, MA guys just play great, sick HC punk is what you need to know. The follow up to the already awesome 'Fucks Your Ears' LP from last year, this 4 song rager is a little more punk and memorable but just as intense if not more so. PJ totally emulates Jerry A in his own way vocally on this record and the music is just bursting with raw power. I know that sounds lame to say, but you can't listen to this and not be blown away I feel. Comes in folded and hand glued covers to boot, this is as nice to look at as it is to hear. Reason the color wax is a little bit more is because it was considered a 'custom vinyl experiment' and I can break even at this cost. Sucks because the experiment was so iffy, some records came out a really light Clear Orange like watered down Kool Aid and some are a bit darker, either way this is a solid EP to own no matter the mark up. I have around 10 on color, so act fast!

Posted by Blitzrecords at 04:31 No comments: