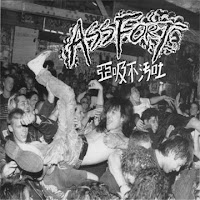 面従腹背思想 (Menjūfukuhai Shisō)
弁解ノ余地ナシ (Benkai No Yochi Nashi)
失望ト恐怖ノ自制心 (Shitsubō To Kyōfu No Jiseishin)
REPRESSED and Available for a limited Time only:
( Limited white vinyl re-release, 500 Pressed)
Manic Tokyo thrash-lunging straight to the jugular with vicious speed, a thrashing drum attack, insane guitar solos and coarse vocals. ASSFORT were the first classic Japanese styled hardcore band to tour in the United States, unleashing a devastating amount of high energy and flooring audiences on both coasts. They released several records, including a split with CHAOS U.K., on Vinyl Japan Records, a CD on the legendary Selfish label, an EP on the mighty Mangrove label and then two Well received follow up LP's in Japan with a new line up. Drummer Kiku currently plays in the world travelling CONQUEST FOR DEATH with members of ARTIMUS PYLE and WHAT HAPPENS NEXT?. This EP's four Classic Assfort tracks were re-recorded in America in 1995 on their first trip to the US by Noah Landis of CHRIST ON PARADE / NEUROSIS.