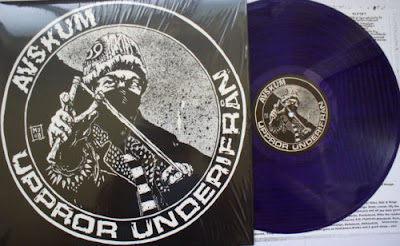 UPPROR UNDERIFRAN" LP
Limited purple vinyl
Blasting an unrelenting wall of D-beat hardcore, Resonating with vitality, "Uppror Underifran" ( translated loosely "Uproar from the Underground") by Swedish Legends AVSKUM is stunningly, their most severe record in the band's 26 year history. An overkill attack of smashing drums and guitar riffage, This Fourth Lp hearkens back to their 1982 origins , with a heavy DISCHARGE bent ala' ANTI-CIMEX mired with the incomprehensibily raw, blunt and brutal song structures found in the original era of Swedish hardcore punk . The MOTORHEAD-ish rock overdrive of their previous Prank LP's is still cranked with the curt economy of masters at the top of their game, capped with AVSKUM's inventive song structures and always great, trademark harsh vocals, all captured in a exceptional recording from Gothenburg's EVIL GRILL studio and slapped in a cool sleeve by Swedish artist CRASH MANGE . Taking a four year break since their last LP,"Punkista", the band took time writing "Uppror Underifran" to deliver 16 incredibly rock solid tracks that transition from their previous recordings to now have largely entirely Swedish lyrics, but still take relevant aim at U.S. War Policy, Capitalism and Mass consumption. Stunningly one of the band's best outings yet that demands to be Played loud! No... Louder! Louder! Louder! 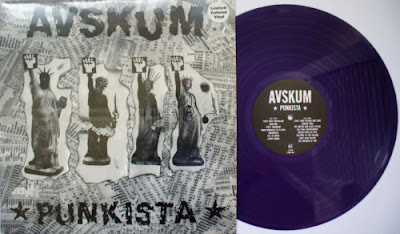 AVSKUM "Punkista"-LP
Limited purple vinyl
Charged and furious, classic Swedish Punk carved out of D-Beat and DISCHARGE, blasting with Hoarse vocals and a wall of guitars. This is the third LP by Swedish legend's AVSKUM, who have existed on and off the Swedish hardcore punk scene since the early 1980's. This LP is marked with unqiue twists and turns that challenge and defy the formula while satisfying both fans of the bands old dirgy style "Ingen Manniska Ar Illegal" and full on DISCHARGE style attack "Children of war". Vital and powerful, Punkista was recorded at Sunlight Studios (entombed) in 2002 . 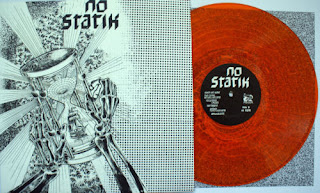 ORANGE VINYL FOR MAILORDER.
( 300 Orange, 300 Brown ( stores only), 300 Black Pressed)
Raging hardcore from the SF Bay area, NO STATIK's Debut 12" takes a straight forward 80's hardcore charge and detonates it with bursts of chaotic 90's hardcore rapid fire drumming, leaving Guitar leads sear and squeal out of the chaos as brutal vocals dredged and nail down dark, pointed lyrics. Six inventive blasts of thick, stop, start and rampage are on the A-side and the B-side is the title track, an experimental track that weaves the band's hardcore attack in and out of an ambient and rhythmic soundscape.
Vocalist Ruby was previously in MOMENTO MORI and SCROTUM GRINDER. Guitarist Mark was in LOOK BACK AND LAUGH and DESTROY!. Drummer B was in SCHOLASTIC DETH and END OF THE CENTURY PARTY. Bassist Robert was in ARTIMUS PYLE, WHAT HAPPENS NEXT? and is in CONQUEST FOR DEATH. The band previously released a debut 7" on IRON LUNG RECORDS, which sold through two pressings in a matter of weeks. 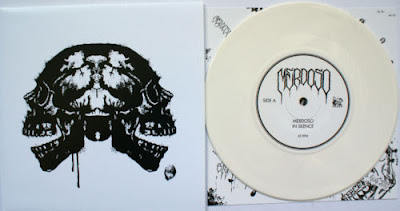 San Francisco's MERDOSO, this three song debut builds on sturdy, straight ahead rushing guitars and solid drumming. Using the repetitive nature of D-Beat as it's Strength, Longer, measured doses of the rumbling, sturdy drum attack, scowling vocals and the unrelenting volley of brutally crude guitar riffage give this EP and unique, dark mood. The recording enhances the EP's enigmatic sound, an echoey quality similar to 80's European hardcore EP's but recorded by Jeff Leppard ( VOETSEK, ACEPHALIX) at San Francisco's Lennon Studios, balances out with the crispness of a modern recording. Features former members of PELIGRO SOCIAL, ACEPHALIX and STORMCROW.


Posted by Blitzrecords at 05:59 No comments: