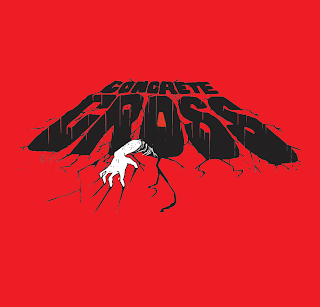 Concrete Cross - Concrete Cross - LP
Concrete Cross formed out of the wreckage of several prematurely aborted NYHC bands including Sick of Talk, Disnihil, Celebrity Murders, and others even less memorable. Accordingly, Concrete Cross maintains strong roots in misanthropy, mania, and self-sabotage.
Despite all of this, Concrete Cross continues to malfunction in forward motion. A bunch of live shows / temper tantrums have been had all around the northeastern U.S., and those disasters will likely spread to the rest of the country in short order. The first, self-titled LP, recorded in Tom’s fucking basement on a bunch of equipment stolen from a Guitar Center or something, will also be shat from the womb in 2013. Musically there are nods to Die Kreuzen, Corrosion of Conformity, the Accused, Citizen’s Arrest, and similar bands only a handful of weirdoes give a shit about. The lyrics all have to do with freaking the fuck out, but not in a fun way - thanx to Man In Decline Records.
Check 'em out at
http://manindeclinerecords.com/bands/concrete-cross/