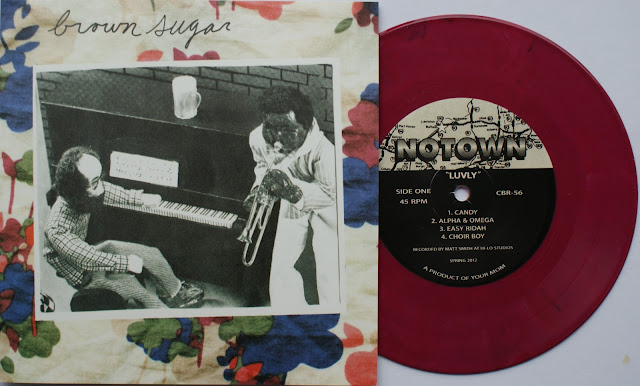 Limited to 60 copies only worldwide on maroon/magenta vinyl
Here's the Buffalo band's latest material and this is also some of their strongest output. Musically it sounds like it could have bridged the gap between the Deportation EP and the Birds/Racism LP, SERIOUSLY. I'd rank this as my 2nd fave release by the guys. It's as punk as the 1st 7'' but as weird as the LP at the same time. I really don't know what else to tell you here, if you are already aware of this band and as into them as much as I am I don't need to sell you on this. No insert was made by the band so please don't ask about it because I can't help you. Printed on reverse covers (can't say board as its not an LP cover) so the gloss is on the inside and the unfinished side is what was printed on of course. Yeah, there's limited COLOR wax for the early birds/nerd scum. A Maroonish MAGENTA is what was made here, I will have about 60 copies to offer so act fast if you want one. - Nick Sick Cowabunga Records.


Posted by Blitzrecords at 10:14 No comments: 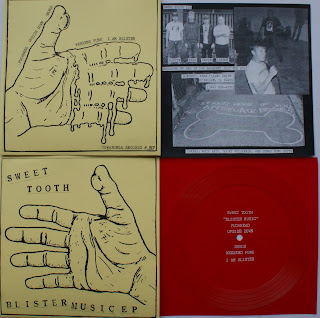 Limited to 100 only world wide on red vinyl
Okay, so where this is a format I never wanted to do due to personal issues I have with flexis, I do oblige by a band's wishes. It was this or maybe a 1 sided 7'' and felt less dirty with this option. This was recorded a year ago and took a long time to come out on both ends, but it finally made it! I actually prefer this short record (3 minutes) most of all from the Toof as its short, nasty and sweet- no pun intended. And as far as a flexi recording sound goes, this works pretty good and actually sounds good for a flexi. All a matter of opinion of course. Comes in a regular cardstock foldover cover and even has an insert,, so its treated like a regular release and not just a flexi in a polybag. And there's even a COLOR option here- RED or BLACK. Red is more limited of course to 100, so please specify. This is a 1 time press of 400 flexis and not small pressed as a gimmick, just seemed right to not overdo it. - Nick Sick Cowabunga Records. 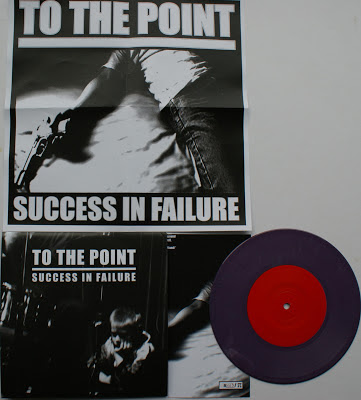 PURPLE VINYL with poster
One time press limited to 314 copies (No wholesale), hand numbered in blood. Unknown amount on purple vinyl.
To The Point - "Success In Failure" Great Review by OPERATION GRINDCORE
Guys, I'm really having a hard time deciding what my favorite EP of the year is. I've definitely narrowed it down to 3, this being one of them. I'm sure you've all heard of To The Point by now; the unstoppable group comprised of members of Actuary, Fetus Eaters, Lack Of Interest and Spazz. Caveman powerviolence. "Success In Failure" is their 2nd EP this year, a beautiful 1-sided 7" in what will probably be a series of EP's of this nature (their previous EP was also 1-sided). Honestly, this new one blows the first completely out of the water for me. And I'm really not sure why. Maybe it's because now I knew what to expect, whereas with the first, the release really was kind of shrouded in mystery. No audio clips, not a nothing was presented before the release. Now, I know the type of noise To The Point bring, and it's a style that I just absolutely love. Total and complete Lack Of Interest-core. Everything that made LoI great is executed perfectly in To The Point, which is no surprise given the people involved. I guess it you could say that there's a distracting lack of originality here, but fuck that noise, because this EP is the jam. Just as the band name advertises, these guys don't fuck around and give you nothing but the best stop/start, hard blasting songs that you're likely to hear all year. The musicianship here is tighter than a nuns nether regions, and the songs are crafted just how you would expect seasoned veterans of this style to make them; perfectly. I just love hearing Bob bash the shit out of a drum kit. Dude really blasts like no other, he definitely has captured a sound that is uniquely his own, with the very dry drum tone and super hard attack. It's also great to hear Chris Dodge, Caveman almighty, front a band again. Again, very early Lack Of Interest style vocals; gruff, low, and kind of cheesy. This 7" is nothing short of absolutely fantastic, and I highly suggest every single one of you to hunt it down and keep tabs on their upcoming releases.  To The Point - "Success In Failure": To The Point are one of my favorite new bands, a band that I will buy anything that they release. "Success In Failure" completely sold me on this band, it's a 7" that I completely fell in love with at first listen. Old-school powerviolence runs through the veins of all the members of this band, and they bash out quality song after quality song with years of experience to back them up. Listen to this band immediately and if you find this record, buy it without any hesitation.
http://grindtodeath.com/zine/time-to-grind-2012
A1 25. No Friend Of Bill W.
A2 15. In It For Life
A3 08. Free Ride
A4 13. Socially Inept Network
A5 05. Infected
A6 18. Decisions I Immediately Regret
A7 26. Faces Of Meth
http://operationgrindcore.blogspot.co.uk
Again as with the first 7" 'Mentally Checked Out' there is no wholesale available for anyone and is already sold out at Deep Six Records. 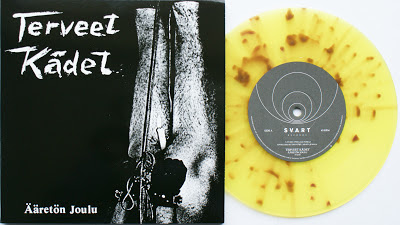 Limited to 300 copies on yellow/brown vinyl
This seven inch piece of vinyl, originally released by Poko Records in 1982, is a perennial favorite of ours, and also one of the most highly praised Finnish hardcore records. This band-approved 30th anniversary reissue comes in a gatefold jacket and features a 12-page booklet with news clippings, photos et cetera. Available on yellow/brown vinyl. 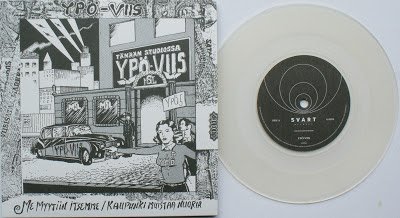 Limited to 300 only on clear vinyl

Originally released in September 1979, this was the first Ypö-Viis seven inch for Poko Records. The Svart reissue is fully authorised and is mastered for vinyl from the original tapes. Available on limited clear and standard black vinyl.
Ypö-Viis made history in Finnish punk scene. They were the first punk band to have a self-released record out. 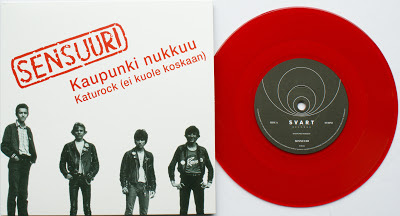 Limited to 300 copies only on red vinyl

Originally released in December 1979, this was Sensuuri's 2nd seven inch. The Svart reissue is fully authorised and is mastered for vinyl from the original tapes. Available on limited red and standard black vinyl.﻿﻿﻿
Finnish punks Sensuuri ("Censorship"), infulenced by Ramones and Buzzcocks, released their first single in 1979 when the guys were only 15-16 years old. The a-side of Kirjoitan Seinään ("I Write On The Wall") was an instant hit with it's angsty lyrics and is now considered one of the classic tracks of finnish punk. A hastily made debut album was released later on same year for mixed reviews and then a couple of 7 inchers more, but nothing like the first single emerged and Sensuuri's career was over after only a year. Drummer Pasi Pakarinen joined later the Ramones style group Pojat and guitarist/songwriter Costello Hautamäki became a notable person in finnish rockscene, most known for his membership in "The Rolling Stones of Finland", Popeda. 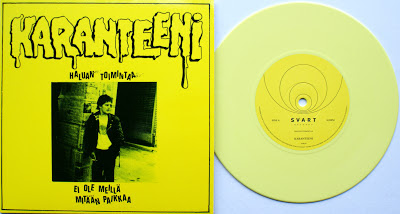 Limited to 300 copies only on yellow vinyl

Originally released in October 1979, this was Karanteeni's 3rd seven inch. The Svart reissue is fully authorised and is mastered for vinyl from the original tapes. Available on limited yellow and standard black vinyl.﻿﻿﻿
A punk band from Tampere, Finland. Karanteeni was founded in 1978 by Konttinen brothers Hate and Rina. The band went through several lineup changes: a total of 18 people have been members of the group. Karanteeni split up in 1984 but still performs occasionally. 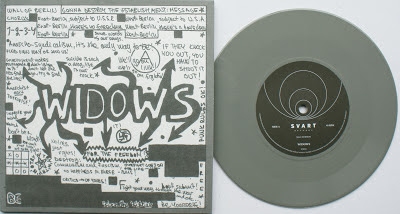 Limited to 300 copies only on grey vinyl

Originally released in December 1979, this was the 2nd Widows 7 inch and their first for Poko Records. The Svart reissue is fully authorised and is mastered for vinyl from the original tapes. Available on limited grey and standard black vinyl.﻿﻿﻿
A punk band from Helsinki, Finland. Widows was founded in 1975 and released their first single in 1979. The band was one of the few Finnish punk bands with English lyrics. They released their only album in 1980 and split up soon after.

Posted by Blitzrecords at 14:24 No comments: 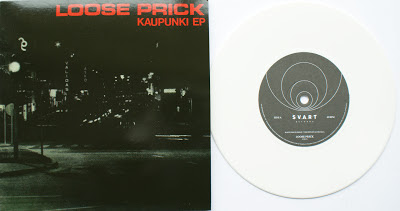 Limited to 300 only on white vinyl

Originally released in December 1979, this was Loose Prick's 2nd seven inch. The Svart reissue is fully authorised and is mastered for vinyl from the original tapes. Available on limited white and standard black vinyl.﻿﻿
Some might recognize this band from the Bloodstains Across Finland comp. Leans a bit more to the melodic and catchy UK influence than the raw and snotty end of late 70's punk.
A punk band from Kouvola, Finland. Loose Prick was founded in 1977 and disbanded in 1982.

Posted by Blitzrecords at 14:17 No comments: