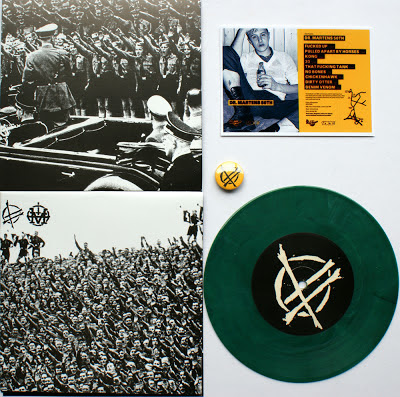 Fucked Up - To my mind this is one of the best punk bands of the 21st Century thus far. The simple catchy songs strike me as being far deeper than they appear on the first listen. The band employs a stripped down "less is more" approach that is three steps ahead of most hardcore punk bands today. The end result are songs that work on several levels at once, manifesting themselves both as "thinking man's hardcore" and circle pit instigating ragers at the same time.

Haymaker-- the same old Haymaker - mean and heavy -five tracks of tough guy hardcore from the masters of bad attitude. Like a cornered rat Haymaker are set to fight to the death. Prepare to be bludgeoned by angry, bitter, and hateful songs that have no finesse, no hidden agenda, no subtleties, and no mercy. Just pure ugly and hateful hardcore. Awesome. 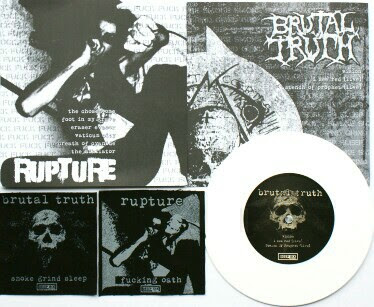 RUPTURE/BRUTAL TRUTH - split 7"
limited to 50 copies only worldwide on white vinyl with 2 x SEW ON CLOTH PATCHES.
HAVE A LISTEN   http://www.allmusic.com/album/brutal-truth-rupture-split-ep-mw0001271165
Reissue of the 1996 "KINDBUD" series split from Rhetoric and Deaf American Records.
Brutal Truth was formed by Dan Lilker in 1990. The band split-up in 1998 and reformed in 2006 with a new guitar player. Rupture was a hardcore punk band from Perth, Australia, that formed in the 1980s and were active until around late 2001, when vocalist Gus Chamber died. The original release was released by Brutal Truth's Drummer (Rich Hoak's) label "Deaf American The original record is a highly sought after, and is hard to come by. It's now being re-released by DeepSix Records. Featuring new artwork by Brutal Truth's lead screamer Kevin Sharp! (Deep Six Records #162)
Originally released in 1997 just prior to Brutal Truth's initial hiatus, this 7" took one studio song and two live songs from the legendary grind outfit Brutal Truth and six from demented hombres Rupture. Back in print for the first time in over a decade.
TRACK LISTING:
1. Brutal Truth - Vision
2. Brutal Truth - I See Red (live)
3. Brutal Truth - Stench Of Prophet (live)
4. Rupture - The Chosen One
5. Rupture - Foot In My Grave
6. Rupture - Eraser Evasor
7. Rupture - Vaticum City
8. Rupture - A Breath Of Cyanide
9. Rupture - The Nihilator 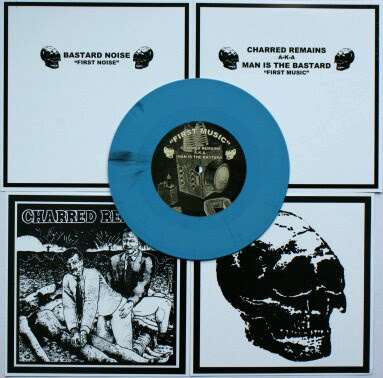