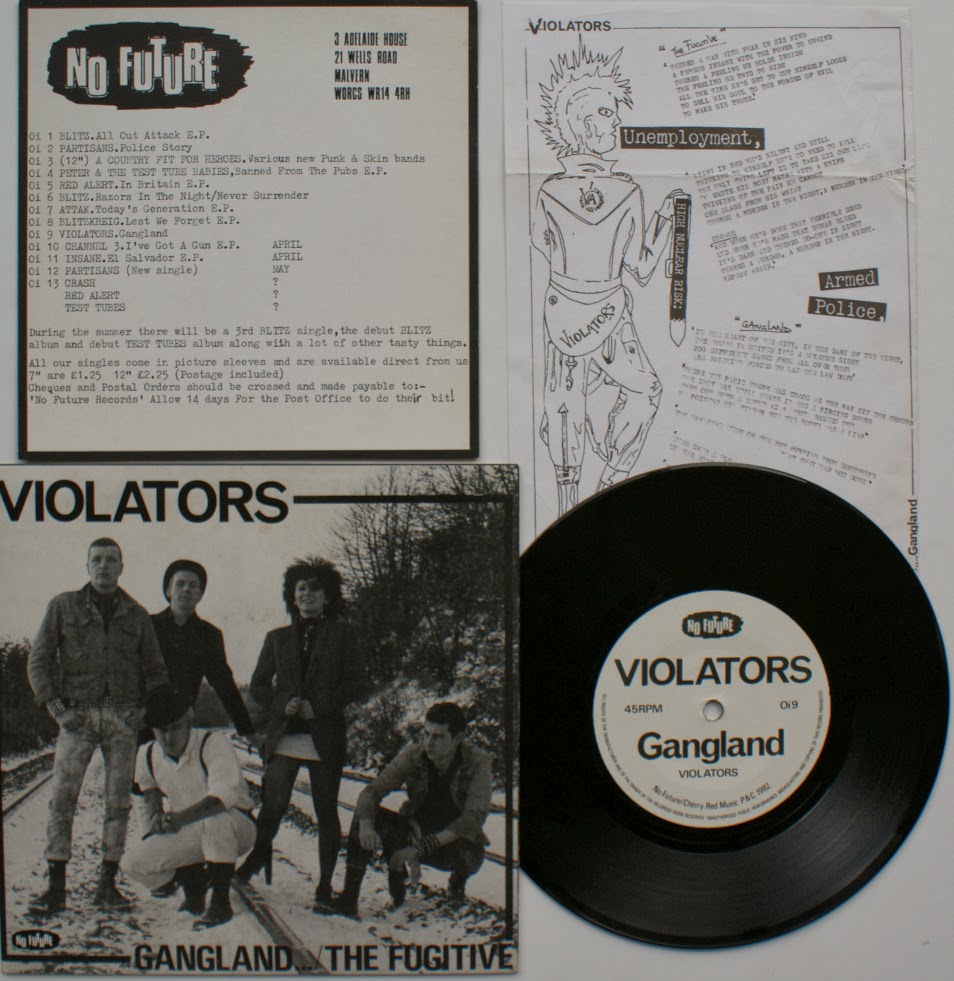 Helen Hill - Vocals, Shaun Styles (Cess or Stylesy) - Vocals, Mark Cole (Coley) - Guitar, John Marchington (Matchi) - Bass, Anthony Hall (Ajax) - Drums
From New Mills, this was another of the good Punk/Oi! bands produced in the Stockport/Manchester area. The Violators used the stark imagery from the film "A Clockwork Orange" to great effect. Never really comfortable in the punk role they, nevertheless, produced some great songs and were much liked by Garry Bushell of 'Sounds' who gave them a lot of press. They split very soon after the release of their second single. Helen and Coley formed Taboo, but never issued any singles. The rest of the band continued briefly as The Violators, releasing a further single on No Future's sister label, Future Records. Styles and Marchington then formed "Ice The Falling Rain", releasing further material on Future Records. Please note that this is not the same band who released a single called "NY Ripper" in 1980.

Superb all round condition - nice clean copy - will be shipped by registered post.
https://blitzrecords.bigcartel.com
Posted by Blitzrecords at 16:37 No comments: 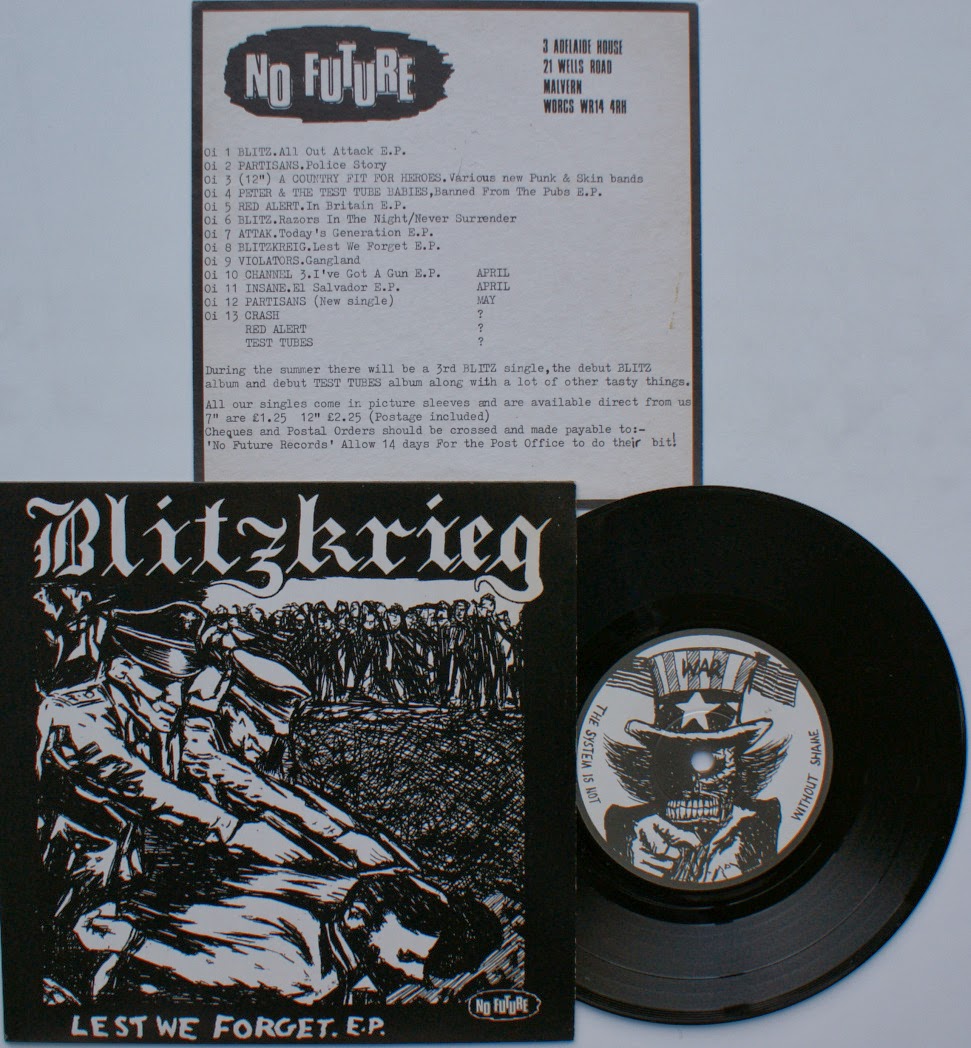 A1. The Abuse Of Power A2. Destruction B1.Lest We Forget B2. Warfares Heroes

Hailing from Southport, Blitzkrieg were formed in 1979 but their progress was hindered by constant line up changes. They released just one EP for No Future, as well as appearing on "A Country Fit For Heroes". Phil left the band shortly after releasing their debut vinyl appearance on the "Country Fit For Heroes" EP. He was replaced by John, who in turn left in 1982, replaced by David Ellesmere (from The Insane) and the band released their "Animals In Lipstick" EP before splitting up shortly afterwards due to personality clashes. Riffone and Ellesmere reformed the band in 1987 and embarked upon a brief tour. They reformed again in 1990, releasing an LP "The Future Must Be Ours" for Retch Records in 1991, which includes remixed versions of their No Future release as well as some previously unreleased material.
nice clean copy includes thick No Future merchant card.
https://blitzrecords.bigcartel.com
Posted by Blitzrecords at 16:34 No comments: 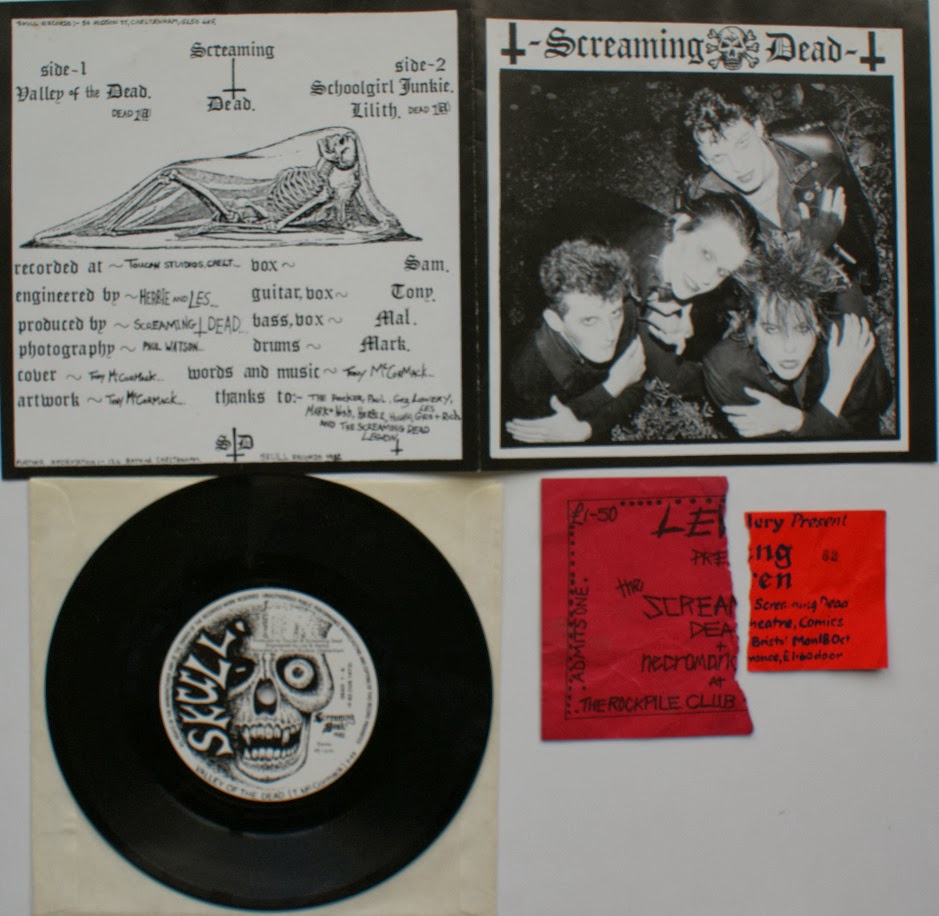 Original first press with wrap-round cover on Skull Records ‎– DEAD 1 - 1983 self released on Skull Records label, but when it sold out its first pressing within a week it was picked up by No Future records.
A.Valley Of The Dead B1. Schoolgirl Junkie B2. Lilith

A heavily Damned influenced band, The Screaming Dead came from Cheltenham and were Gothic through and through. Letters to the No Future label were always accompanied by intricate illustrations - the band's presentation was amazing and they certainly lived the part! They released three singles for No Future and two more afterwards before folding in 1987. A retrospective CD album entitled "Bring Out Yer Dead" was released in 1993, and they reformed to release another CD, entitled "Death Rides Out" in 2000, comprising some new versions of their old material as well as some new material. Tony later formed Inkubus Sukkubus, with whom he is still touring and recording.

Superb all round condition - vinyl and cover both excellent - original self released on Skull Records label with wrap-round cover - includes 2 x original gig half ticket stubs - will be shipped by registered post.
https://blitzrecords.bigcartel.com
Posted by Blitzrecords at 16:30 No comments: 3 x formats 1. First press of 500 with rubber stamped labels and fold-out cover -SOLD OUT. - 2. Second press with blank white labels and fold-out cover. - 3. Third press with No Future labels and pic cover.
Carl Fisher - Vocals / Nidge Miller - Guitar, Neil McLennan (Mackie) - Bass, Charlie Howe - Drums
Formed in 1980 in New Mills, Blitz were the label's first signing. Their debut release, a four track EP, was recorded very quickly, as were most singles on the label. The first pressing of 1000 copies were sold in a few days, mainly by mail order. A subsequent distribution deal with Rough Trade and Pinnacle led to sales of over 20,000 copies. Initial copies were all hand stamped as the label thought they would only sell 1000! Their debut album even hit the National charts! The band later became one of the most influential Punk bands of all time with numerous late 90's Punk bands covering their songs. Tragically, Nidge died in a road incident in Austin, Texas in February 2007 after a gig whilst touring with his reformed band.
all in great all round condition - 1 & 2 will ship by registered post.
https://blitzrecords.bigcartel.com
Posted by Blitzrecords at 12:42 No comments: