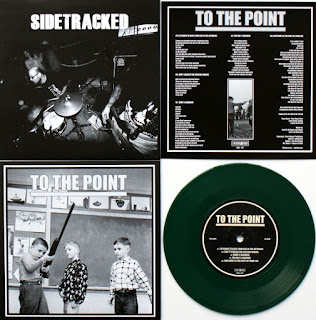 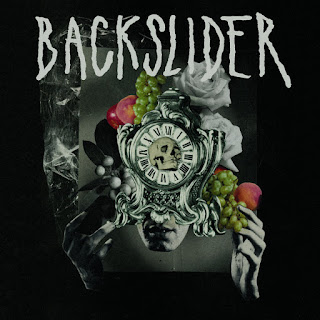 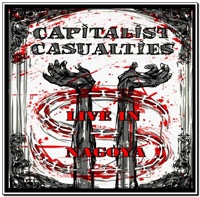 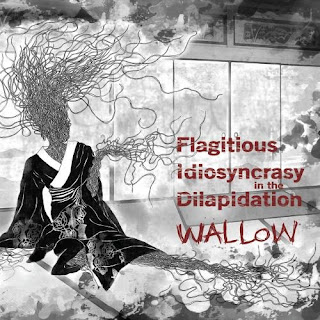 BACKSLIDER - Motherfucker - LP.
PRE-ORDER - HERE SOON - very limited stock available - don't sleep on these fuckers - https://blitzrecords.bigcartel.com/
Encapsulating the last 15 years of extreme musical devastation in one album, BACKSLIDER has drawn on its influences and expanded its doom-laden attack to unleash a hellstorm of massive musical terror - Backslider's brand of weird, dirty powerviolence has been a welcome thorn in the side of the Philadelphia underground music scene since 2009's Skull-Fracturing Fastcore demo. Seven-ish years and a half dozen releases down the line, the trio is finally poised to release its first-ever full-length album (their first release as a trio, thanks to the addition of bassist Jake Smith). Motherfucker comes out January 15 via Six Weeks Records, and man, I'll tell ya, it's a real motherfucker of a recording.
Powerviolence, grindcore, fastcore, hardcore, skronky grunge, big fat slabs of grimy rock'n'roll—you'll find all that on this groovy, grinding piece of mayhem. There's a serious rock element to many of these songs, which is more than a little uncommon when discussing fastcore or any of its noxious fellows. When the band name-checked Black Sabbath and Nirvana in their initial email to me, I thought it was nonsense... until I pressed Play, and found out exactly what they meant. There's plenty of -core afoot here, too, lest ye imagine for an instant that Backslider's gone soft; the ignorant grooves on "Sex in Prison" and noise rock noodling on "Swollen and Sore" alone make the purchase price worth it, to say nothing of the five other tracks that whip by in a flash on this short, salty beauty of a debut.
https://youtu.be/KlgrUHVJiKg
00:00 R.Y.S.D.
02:18 Deep In The Glue
04:45 Sex In Prison
06:28 I Talk To Ashes
10:14 Swollen and Sore
13:12 Motherfucker

CAPITALIST CASUALTIES-“Live In Nagoya” Japan - LP
Fastcore, Power-Violence band CAPITALIST CASUALTIES from California, USA are active since 1987 and never lost their freshness. Hectical sometimes hyperfast crushing music with very pissed off vocals, never boring and over the top, no wonder the members already played in several bands like CHARLES BRONSON, WHAT HAPPENS NEXT ?, PLUTOCRACY, SCHOLASTIC DEATH, SPAZZ, ELEPHANTMAN, .
This cool live recording was done in the legendary Huck Finn, Japan.
Limited edition of only 900 copies on Black vinyl.
Tracklist
A1 Antiquated Decorum
A2 Bad Habits
A3 Sarin
A4 Beggars Can't Be Choosers
A5 Diamonds And Warheads
A6 World War Whatever It Was
A7 Jobs
A8 Reborn
A9 Fornicators
A10 Left A Scar
A11 Hired Fool
B1 Holocaust Money
B2 Overpriced
B3 Atomic Enemy Commission
B4 Fashion
B5 Methamphetamine
B6 Luxury Soul
B7 Fuck The Christians
B8 Drug Culture
B9 Drainage Ditch
B10 Irukandji
B11 Strange Soup
B12 Greedy Bastards

Flagitious Idiosyncrasy In The Dilapidation – Wallow - LP
Superb album from these incredibly talented Japanese ladies play an epileptic convulsion of old school, raw grindcore infested with traditional Japanese hardcore and punk and are no strangers to the outside world, The 4 ladies wailing through menacing blasting and grinding death with touches of traditional Japanese hardcore, complete with blazing fast drumming, relentless guitar work and blood curdling screaming vocals, having played all the premier metal festivals, like Maryland Deathfest, Obscene Extreme in the Czech Republic and Short Fast & Loud Fest. LP limited to 500 copies.
https://youtu.be/hLLCFejEGW0
A1 Copy Cat 0:55
A2 Wallow 0:58
A3 Gaze 1:30
A4 What You…… 1:35
A5 Ignorance 1:16
A6 躓き 2:01
A7 Day Dream 1:00
A8 Nightflesh 1:41
B1 Deserve 1:55
B2 殺せ 1:20
B3 虚言 1:48
B4 離せ 1:38
B5 Obstacles 1:12
B6 Transient Blindness 1:36
B7 Fall 1:09
B8 Let's Go!
Posted by Blitzrecords at 16:59 No comments: 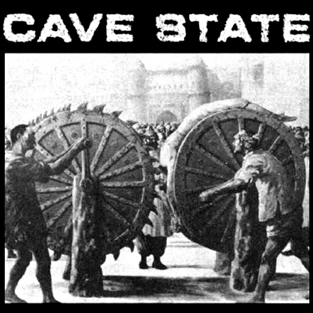 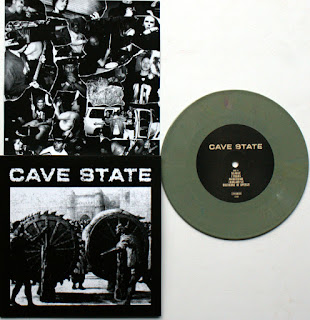 
AVAILABLE HERE http://blitzrecords.bigcartel.com/
Fast power violence that Southern California is known for, . of Spazz and Crossed Out. No frills, just fast hardcore. Limited colour vinyl of 100 available now!
A1 Scarce
A2 Tyrant
A3 Manferior
A4 Troglodyte
A5 Disfigure Of Speech
B1 Primitivo
B2 Satisfy The Butcher
B3 Humiliate
B4 Use / Repeat
Posted by Blitzrecords at 16:25 No comments: 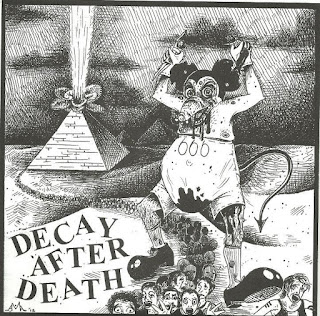 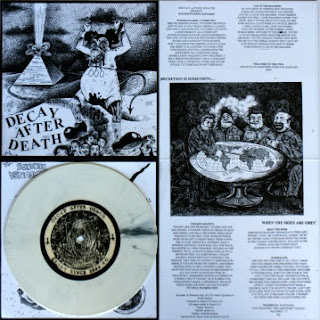 Decay After Death- System Fucking Bastards EP - 7" white vinyl.
Limited to 70 copies only worldwide on Opaque WHITE wax with a Black streak - just how limited is this fucker - up for consumption here - ONE COPY PER CUSTOMER ONLY!!! https://blitzrecords.bigcartel.com
Filthy D-beat punk rock noise assault! Hailing from Chicago & featuring members of KRANG. If you've been sleeping on this its time to wake up!
Musically, this record is more PUNK and a little less rockin' then the 1st one but still what I call a 'traditional DxAxDx record'. If I had to make comparisons, I'd say this one where a generic description is still apt- Varukers and Discharge crossed w early Inepsy, GBH, Guns N Roses, Burning Spirits style Japanese HC and Violent Society with slight midwestern flair. 70 copies available on Opaque WHITE wax with a Black streak.
A1 System Fucker / Citizen Spy
A2 Cog In The Machine
A3 Welcome To The NWO
B1 Beat The Boss
B2 Violent Society
B3 Painkiller
Posted by Blitzrecords at 09:56 No comments: 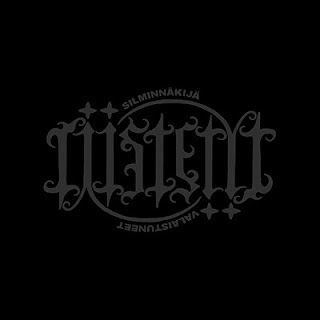 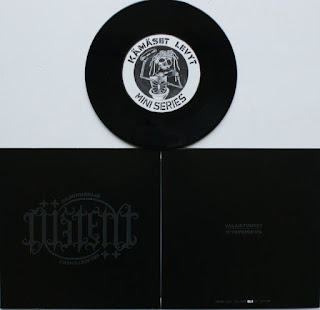 Riistetyt - Valaistuneet/Silminnäkijä - 7" ltd /100Limited to 100 HAND NUMBERED copies only - sold out from label - very limited stock available - indulge here http://blitzrecords.bigcartel.com/One new "Killing Joke -style" song and a NollaNollaNolla-cover from this classic long-running Finnish hardcore punk band! Limited to 100 numbered copies. ONE COPY PER CUSTOMER ONLY!!! Tracklist A Valaistuneet
B Silminnäkijä
Posted by Blitzrecords at 16:19 No comments: 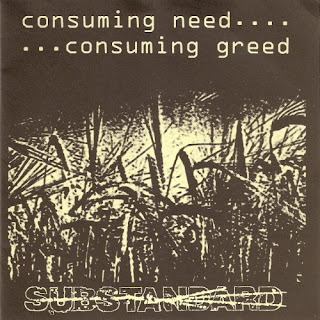 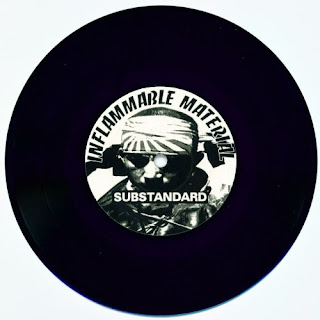 
SUBSTANDARD was a UK Anarcho Punk band from Nottingham and well known for their manic Live performance and outrageous speed in their style of song-writing... A shredding thrash metallic "punk" soundtrack to support a strong punk political message spitted out by pissed off dual vocals... they released two brilliant Demo Tapes, 3 Split 7" EP´s with NERVES, PINK FLAMINGOS and DETESTATION as well as a own 7" EP.
A1 Spreading Like A Virus
A2 Disarm Or Die
B1 Kick It
B2 Consume
Posted by Blitzrecords at 14:08 No comments: 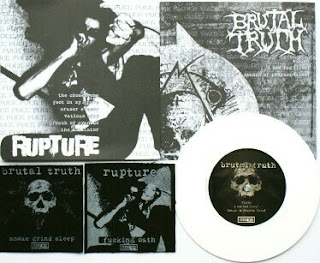 RUPTURE/BRUTAL TRUTH - split 7" limited to 100 copies worldwide on white vinyl - these first 50 mailorder only with 2 x sew on patches - a classic piece of wax available here https://blitzrecords.bigcartel.com
HAVE A LISTEN http://www.allmusic.com/…/brutal-truth-rupture-split-ep-mw0…
Reissue of the 1996 "KINDBUD" series split from Rhetoric and Deaf American Records.


Brutal Truth was formed by Dan Lilker in 1990. The band split-up in 1998 and reformed in 2006 with a new guitar player. Rupture was a hardcore punk band from Perth, Australia, that formed in the 1980s and were active until around late 2001, when vocalist Gus Chamber died. The original release was released by Brutal Truth's Drummer (Rich Hoak's) label "Deaf American The original record is a highly sought after, and is hard to come by. It's now being re-released by DeepSix Records. Featuring new artwork by Brutal Truth's lead screamer Kevin Sharp! (Deep Six Records #162) Originally released in 1997 just prior to Brutal Truth's initial hiatus, this 7" took one studio song and two live songs from the legendary grind outfit Brutal Truth and six from demented hombres Rupture. Back in print for the first time in over a decade. 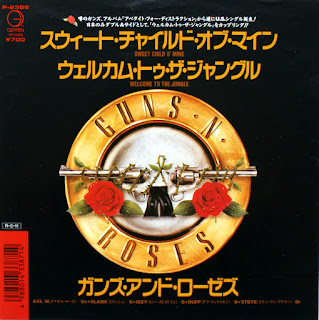 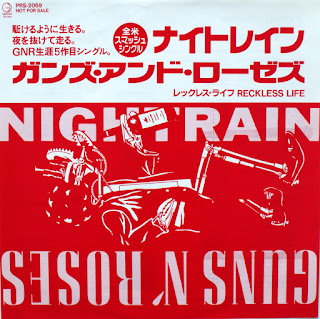 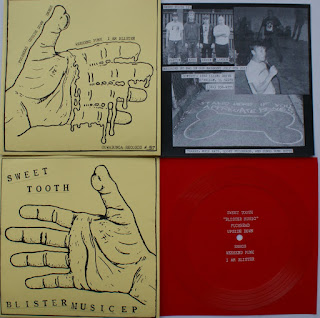 Sweet Tooth - Blister Music - 7" red flexi EP.Long out of print flexi - long defunct band - from 2012 - One time press limited to 300 only world wide on black vinyl - 100 on red - great packaging for a flexi - few remaining copies here - https://blitzrecords.bigcartel.comhttps://youtu.be/SHQWcYENLhsDuring their three or four year existence, St. Louis' Sweet Tooth had one thing on their minds while writing music. Speed. Just about everything else came together after that. Bands like this never last because they're too fast and out of control, but that's what makes them so grand. Sweet Tooth never had the opportunity to fuck up. This shit is solid thrash goodness. And as far as a flexi recording sound goes, this works pretty good and actually sounds good for a flexi. All a matter of opinion of course. If you liked the demo and EP, you'll love this. Comes in a regular cardstock foldover cover and even has an insert,, so its treated like a regular release and not just a flexi in a polybag. This is a 1 time press of 400 & not small pressed as a gimmick/collector thing, just seemed right to not overdo it.A1 Fuckhead A2 Upside Down A3 Smegs A4 Weekend Punk A5 I Am Blister
Posted by Blitzrecords at 10:09 No comments: