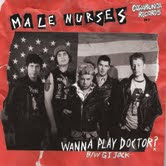 Wanna Play Doctor? b/w GI Jock
Black vinyl Sick Club issue
The 1st release from the Sick Club imprint is Somerville MA's MALE NURSES. Since its a singles club you'll either get 2 songs or 1 longer song and 2 short songs, so for theirs the band opted for 2 songs. These are actually rescused songs from a now aborted tour record, a good thing too since these are great tunes. The band has gotten more punk if anything since the debut on Deranged as they incorporate more melodies like the same classic 80's SoCal no brainers you'd expect.

Posted by Blitzrecords at 16:37 No comments: