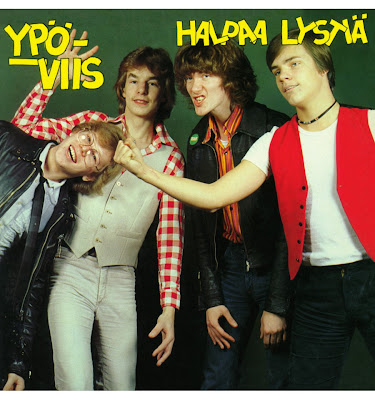 Released in early 1980, this is the only studio album by this early Finnish Ramones-influenced new wave punk band. The Svart reissue of this rarity has been remastered for vinyl from the original master tapes, and the package features a 16 page booklet with random interviews and pictures from the era.
Ypö-Viis was formed in Karhula in summer 1977. Originally the band was five-piece, but as they changed their style to new wave, the organ player and second guitarist were dropped off. The remaining trio was Miika Söderholm: bass & vocals, Mikko Holmström: guitar and Rabbe Johansson: drums. In the early days they only gigged locally (today Karhula is part of Kotka). The self-financed one-sided single (or is it an EP?) Energia on A ja O/Kotka palaa was released in late 1978. 200 copes were pressed, costing them 600 Finnish marks. The recording sounds really crappy, but the songs are pretty good. Energia is their own composition and the flipside is a cover version of The Clash's London's burning. The next step was to found a record company of their own, called Karva-Levyt. The new label's first release was naturally Ypö-Viis' next single Mari pogoaa/Mikkitelineestä on puolet minun, released in spring 1979. The A side is a catchy pop song, and the single was even seen on Suosikki's top sales charts! In spring they were also featured on Hilse compilation LP with their song Pelkään pimeää. That song was recorded with a new lineup, as Jari Räsänen had joined the band on bass, allowing Söderholm to concentrate on vocals, and occasionally on rhythm guitar. Pelkään pimeää is one of the best tracks on the album, a pop song of course.
Then they signed a deal with a bigger label, Poko Rekords, and logically the first Poko release was called Me myytiin itsemme ('We have sold out'), b/w Kaupunki muistaa nuoria, released in fall 1979. The songs are good, and the most notable change is the improvement on the sound department. Despite the new recording deal they didn't bury Karva-Levyt (later releases on the label include singles by Pupukuusikko, Tommy & Teenagers and Zoint (pre-Saigon)), but released their first album Karhulan poikii live in late 1979. The LP is extremely fun, in fact it may just be the best live album that has been made in Finland. Covers include songs by The Clash and Sham 69. The band kept themselves busy as they were already recording a studio album in November. Unfortunately Halpaa lystiä LP is a disappointment. Kuvien kauniit naiset was also released as a single, with Ujona discossa (not on album) on the B side. Both the single and the album are boring. Two songs, Tänään kotona, the B side's opening track, and the following Ystävät kautta maan, are worth listening to more than once. The album was released in early 1980. In 1979 Söderholm also made a guest appearance as a backup singer on Kollaa Kestää's Jäähyväiset aseille LP. Fortunately Ypö-Viis' story didn't end there, instead in spring 1980 they made by far their best release, the single Hyvästi masentava maanantai/Rakkauskirjeet. The B side is sung by Räsänen. Both are catchy tunes, and everything looked good again. Then they visited a Turku studio to record songs (Steppaava hirvi and Muistoissani aina) for a future compilation (Eppu Normaali was supposed to be on it too), to be released on Karva-Levyt, but due to lack of bands and material the compilation was never released. However, despite the bright outlook, things weren't that good after all. Holmström quit the band in favour of his studies, and he was replaced by Pekka Stirkkinen. On their last single Keskiolut takaisin Alkoon/Kaunis poika Stirkkinen played both guitar and bass, because Räsänen was performing his compulsory military service at the time. Both songs are great, especially the latter. The band, or Söderholm and Stirkkinen to be exact, made a tour in Lapland with a temporary replacement drummer (Johansson was too busy with his school exams to join them), after which the band broke up. It's a good thing the last recordings were among their best. text by Vesa Vahtera, translation by Jarkko Kuivanen. 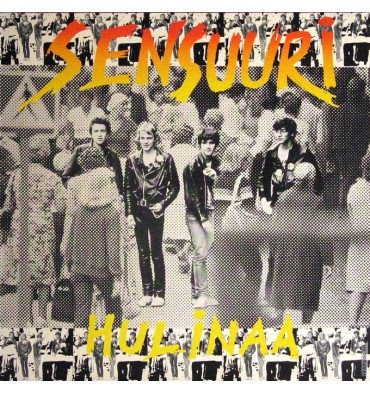 Sensuuri had burst into the Finnish punk scene in early 1979 with the debut single Kirjoitan seinään (also reissued on Svart) and got offered a deal for a full length album. The result, Hulinaa, appeared in the summer of 1979, and many consider this youthfully energetic LP their absolute favorite Finnish punk record. We can't help but agree. This classic album has been 24-bit remastered for vinyl from the original master tapes and the original cover art has been expanded to a gatefold jacket. 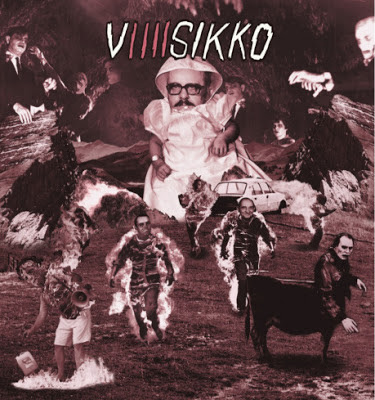 Viisikko, whose name translates as The Famous Five, is not a group of child detectives but a mysterious group of people from Oulu, northern Finland, who among other things create quite a terrifying racket that taps into the same unending source of inpiration bands like Black Flag, Melvins, Radiopuhelimet and Dead Kennedys have drawn from.

An amalgam of classic rhythm-based hardcore and slight sludge metal influences, Viisikko's "IIII" is the first time the band's music is available to a wider audience.
Having played together since 2007, the band released the album as a self-financed tape in 2011. The tape caught the attention of Svart Records, and this cult album is now being reissued on vinyl, wrapped in gatefold covers and limited to 400. The band keeps a decidedly low profile and refuses to give any lineup info or appear in photographs.
http://viisikko.bandcamp.com/album/iiii 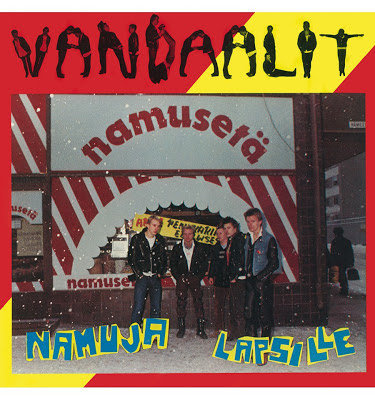 Vandaalit was a group of youngsters in the mid-seventies playing rock'n'roll, but hearing Leave Home by The Ramones changed everything, and soon the band changed style to rough, simple punk rock. This is their debut album from 1979, and it's also one of the rarest Ramones-influenced punk records in Finland. The Svart reissue is an exact replica of the original, with the rare 12 page booklet ON BLACK VINYL. 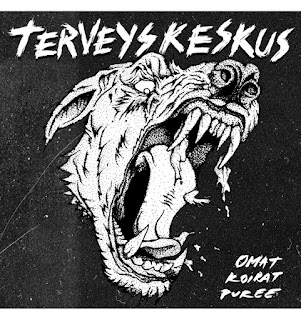 Limited to 350 copies only world wide

Finnish hardcore punk combo TERVEYSKESKUS ("Community health center") started in 1982, the year of the big Finnish hardcore punk explosion. For various reasons, however, even though the band gained cult popularity and played plenty of gigs, they did not end up in the studio until 1987. The resulting debut EP Maailmanloppu (reissued on Svart Records) is a Finnish hardcore mini classic.
Terveyskeskus is perhaps best known for the extracurricular activities of its members, and Mana Mana in particular: band leader Tumppi is a founding member in Mana Mana, and MM guitarist Otra also plays in Terveyskeskus. While Mana Mana's music is built of layers upon layers of eastern-flavored heavy guitars and doomy moods, Terveyskeskus concentrates on the raw, primal energy of classic hardcore punk.
While never actually splitting up, Terveyskeskus has been on the backburner for the past 20 years. In 2012 original members Tumppi and Salttu found themselves putting a new lineup together and recording a new album. The result is Omat koirat puree ("Your own dogs will bite you"), a furious 11-song burst. 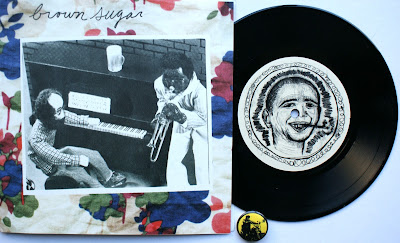 one time press of 410 on black vinyl.

Here's the Buffalo band's latest material and this is also some of their strongest output. Musically it sounds like it could have bridged the gap between the Deportation EP and the Birds/Racism LP, SERIOUSLY. I'd rank this as my 2nd fave release by the guys. It's as punk as the 1st 7'' but as weird as the LP at the same time. I really don't know what else to tell you here, if you are already aware of this band and as into them as much as I am I don't need to sell you on this. No insert was made by the band so please don't ask about it because I can't help you. Printed on reverse covers (can't say board as its not an LP cover) so the gloss is on the inside and the unfinished side is what was printed on of course. - Nick Sick Cowabunga Records. 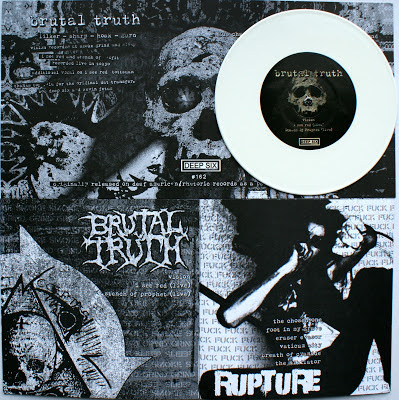 RUPTURE/BRUTAL TRUTH - split 7" very limited white vinyl
Reissue of the 1996 "KINDBUD" series split from Rhetoric and Deaf American Records.
Brutal Truth was formed by Dan Lilker in 1990. The band split-up in 1998 and reformed in 2006 with a new guitar player. Rupture was a hardcore punk band from Perth, Australia, that formed in the 1980s and were active until around late 2001, when vocalist Gus Chamber died. The original release was released by Brutal Truth's Drummer (Rich Hoak's) label "Deaf American The original record is a highly sought after, and is hard to come by. It's now being re-released by DeepSix Records. Featuring new artwork by Brutal Truth's lead screamer Kevin Sharp! (Deep Six Records #162)

Originally released in 1997 just prior to Brutal Truth's initial hiatus, this 7" took one studio song and two live songs from the legendary grind outfit Brutal Truth and six from demented hombres Rupture. Back in print for the first time in over a decade.

Posted by Blitzrecords at 18:05 No comments: