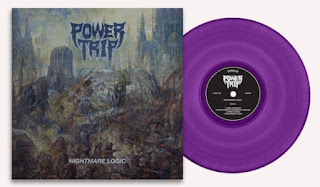 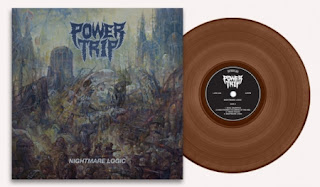 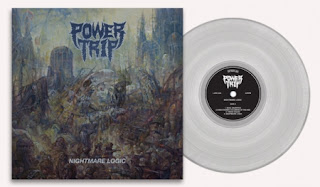 PREORDER - HERE NEXT WEEK
Power Trip – Nightmare Logic - LP purple, clear and brown vinyls.
limited press of 500 copies - something a bit different - I like it muchly - I am only allowed 10 copies, so get it or regret it here https://blitzrecords.bigcartel.com
Power Trip executes music with raw energy. They’ve trimmed the fat on every reference they pull from - whether that’s Hardcore, Metal or Punk - to make music that actually cuts in 2017. Hailing from Dallas, the band have toured the world relentlessly for years. Their musical proficiency, perfect song structure, rich tones, fierce riffs, delivery and collective attitude has seeded them as one of today’s most prolific acts in any astute or heavy genre. Power Trip boldly surprise their broad fan base by performing alongside less obvious artists - closing the gap that in 2017’s social climate desperately needs to be filled
Nightmare Logic has taken Power Trip’s classic sound to new places. Gale’s lyrics reflect that aggression by honing in on the devaluation of human life by those who’ve gained power through money and politics. By creating a broad dissection of human suffering above reproach from personal agendas, the lyrics attempt to unify and inspire listeners. Coming from the hardcore world, where every band vaguely fights “the man”, wants to live free and break down the walls, Power Trip noticeably stands out. Instead of skirting around the fetishization of fighting back, Nightmare Logic focuses in on real oppression felt by many all over the world, whether that’s fighting addiction and the pharmaceutical industry (Waiting Around to Die) or right-wing religious conservatives (Crucifixation). Taking cues from Discharge and Crass in Margaret Thatcher’s UK, Nightmare Logic delivers poignant social information directly into those homes engulfed in the sour turn of global politics towards right-wing agendas. Touring the world on Nightmare Logic, Power Trip will play to scenes much further outside the bubble of contemporary underground punk music than any other current band, all while pushing the envelope of the modern punk ethos.
https://youtu.be/Al7rzFSjdgs
https://youtu.be/xdE4RO_P-qE
A1 Soul Sacrifice
A2 Executioner's Tax (Swing of the Axe)
A3 Firing Squad
A4 Nightmare Logic
B1 Waiting Around to Die
B2 Ruination
B3 If Not Us Then Who
B4 Crucifixation
Posted by Blitzrecords at 08:41