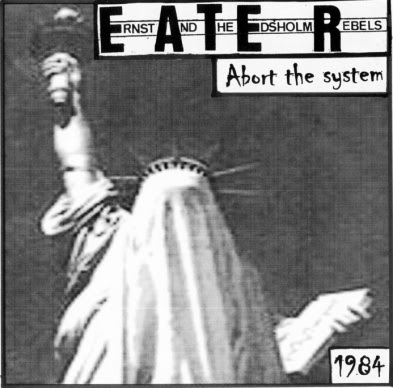 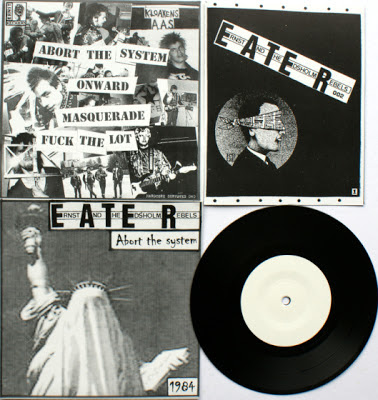 E.A.T.E.R. - Abort the System 7"ep (HCS-040) limited to 1000 copies worldwide.
Ernst And The Edsholm Rebels – E.A.T.E.R. are a Swedish Hardcore band formed in the summer of 1982 in Grums/Kil, Värmland, Sweden by Mikael “Gröten” Karlsson - guitar and vocals, Anders Brännström – bass, Peter “Pelle” Forsman – drums and Hans “Hasse” Dahlgren – vocals.
Legendary E.A.T.E.R.(ERNST AND THE EDSHOLM REBELS) again!
This was expected to be released by their ERNST rec in 1984'. It will now be released with original sleeve and unpublished 8 pages booklet like the "Doomsday Troops" ep. speedy and melodious Trall raw punk attacker more than the 1st ep. They passed so many offer to release this 7" that it's time to be released now! It's also remastered for this gem.
Release on 7th/June

Ernst And The Edsholm Rebels – E.A.T.E.R. were formed in the summer of 1982 in Grums/Kil, Värmland, Sweden by Mikael “Gröten” Karlsson (guit/vox), Anders Brännström (bass), Peter “Pelle” Forsman (drums) and Hans “Hasse” Dahlgren (vox). and this first line-up of E.A.T.E.R. recorded Chaos Cassette vol.1 which was realesed in the fall of 1982. A number of gigs were played by this first line-up, among them the chaotic and by media well documented gig at Segmons Folkets hus in february of 1983. By the release of the bands debut EP Doomsday Troops (Ernst Records) Hasse was replaced by Mikael “Micke” Larsson as the leadsinger. Micke had earlier played in Psykjouren together with infamous and by now nationwidely known Buddha. Doomsday Troops EP was recorded and produced In KAAS by the band & Micke Blomqvist, and released in the summer of 1983. The record was sold all over the world, and E.A.T.E.R. recived recognition from people like Jello Biafra of Dead Kennedys and Pushead, the artist that made Metallicas and the Misfits cartoons. With the new line-up and a sucessfull record-realese the band went on the road and toured Sweden. A review: Not to be confused with the '77 U.K. punk band Eater, this Swedish group (Ernst And The Edsholm Rebels) floor down on the acceleration and rapidly hit fast, lightning doses of 1000-m.p.h. thrash mayhem. An outrageous display of burning speed and mind-boggling turbulence, combined with chaotic chops of lyrical expression. Don't be fooled by the hilarious intro to the title cut--this EP hauls its load fast and furious in the new Swedish tradition. - Pushead (from Maximum Rock'n'Roll #13, April/May 1984) - The band is still active and I recommend this 5 piece of classic swedish hardcore tunes.
-Special Thanks to Fredrik -