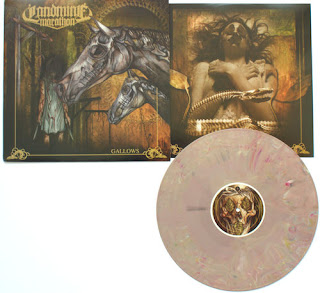 Landmine Marathon's base of operations is Phoenix, Arizona and with three albums under their belt already it looks as if just maybe "Gallows" might be the one to finally break them to the masses. Fronted by the full-time political activist/part-time librarian and all around intense vocalist Grace Perry (who MTV called a "dynamic she-beast"!) this death-grind band have laid down a thunderous assault on the senses. When your raised on punk and hardcore like Perry was then fronting a blistering grind band like Landmine Marathon is going to have some seriously wicked end results. Looking to bridge the sonic gap between Bolt Thrower and Entombed and bring back the noise of crusty death means you have to lay down a fair amount of your own blood in the process and this five-piece band does that in bucket loads. This is one serious blow against the empire and even if album number four tones down the political banter in favor of more fantasy elements it never detracts from just have much of a budgeting affair this is. Intense doesn't even begin to describe "Gallows".... many thanx to Andy at Heavy Metal Time Machine.

A1 Three Snake Leaves. A2 Cutting Flrsh And Bone. A3 Knife From My Sleeve. A4 Liver And Lungs. B5 Dead Horses. B6 Cloaked In Red. B7 Beaten And Left Blind. B8 Morbidity.