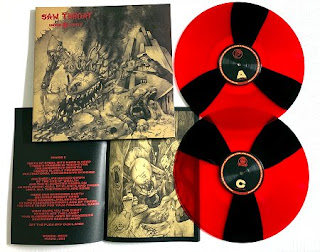 CONTACT ME HERE FOR AVAILABILITY  blitzmike@hotmail.co.uk  OR USE THE CONTACT BOX AT THE BOTTOM OF THE PAGE AND I'LL EMAIL YOU A TOTAL.
Radioactive sign red/black vinyl limited to 150.
The ultimate edition of this masterpiece of apocalyptic heaviness! Originally released in 1989 as the band’s third album (considering the fact that Saw Throat is nothing else but a further stage in the legendary Sore Throat saga), and with a marked musical shift towards the more sinister sound of bands like The Swans, Saint Vitus, Amebix and Gore, “Indestroy” was envisaged as a one song concept LP with a lyrical emphasis placed on enviromental issues (3 decades BEFORE the current publicity seeking populism of mainstream popstars and media celebrities pretending to give a fuck about the planet). Improvised and recorded over a period of three weeks, the resulting album become not only the crown jewel in the band’s history, but the final nail in the coffin of them being an ongoing concern as the three core members concentrated on their own bands and all moved on.
However, the reception and cult status has grown over the years. And so, after digging through many old cassettes, the original rough mix instrumental version of the album was located featuring a different running order, and a heavier/more guitar orientated and less polished sound. As a historical artifact, this was the version vocalist Rich listened to while writing all the lyrics the night before he was due to record them. There are also some sound effects and small parts that never made it to the final version. Either way, as one of the last truely great recordings of the 80’s, this as now unheard version of the “Indestroy” album is for the first time made available to the public domain housed in a thick reverse board gatefold jacket with fully restored original artwork, extensive liner notes and a stunning 24 page full colored lyric and artwork booklet.
Posted by Blitzrecords at 18:00