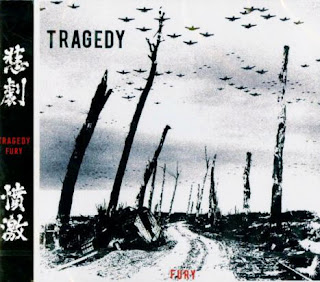 Pre-order, on the way from Japan.
DIY hardcore punk band from Portland, Oregon / USA. Founded in 2000.
It is not an exaggeration to say that it is the most influential band in the modern HARDCORE, CD album of the new LP that TRAGEDY has finally released.
Sold in advance in "BLOODSHED FEST 2018", this latest work that let the whole world go wildly is a piece reminiscent of a return to its origin, like the 1st-3rd flow. As you know, they reached the point where they would never reach ordinary people with their previous work "DARKER DAYS AHEAD". But this time I have presented a straight hardcore sound with a wide swing from there. There is no doubt that unconditionally buzzing sound chunks are "that" TRAGEDY sound, but it is simple, yet it is through the previous work that you can feel more depth. It may be said that they did not return to the origin, but at the end of further evolution, this sound.
01. Leviathan
02. Enter the Void
03. Kick and Scream
04. Fury
05. Swallow the Pill
06. A Life Entombed
Posted by Blitzrecords at 17:26