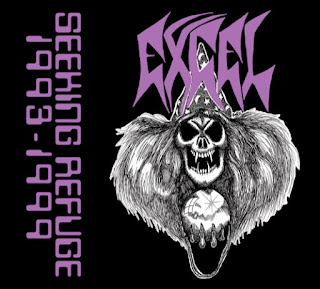 The 3rd album, which is currently difficult to obtain, of Venice Texas · Hardcore · scene's most important band EXCEL, it is a special edition of 18 songs that are extremely important as a band archive, also the live recording of their last show before the reunion.Excel is a crossover thrash band from Venice, California. The band never achieved commercial success during their early years of performing and recording, but they are considered to be one of the first crossover thrash bands to come out of Venice, along with their hometown heroes Suicidal Tendencies. They started in 1983 under the name Chaotic Noise and members at that time were Dan Clements (vocals), Adam Siegel (guitars), Rickey Palamino (bass) and Evan Warech (drums). In 1985, they changed their name to "Excel" and Palamino and Warech left the band since then. Their replacements were Shaun Ross and Greg Saenz.
After releasing two albums, Split Image in 1987 and The Joke's on You in 1989, Siegel joined Mike Muir's Infectious Grooves in 1991. However, during this time, Excel had already started working on new material for what would become their third and last album, but was put on hold several times, due to Siegel's tour schedule with Infectious Grooves. The album, titled Seeking Refuge, was not released until 1995. After that, Excel continued under various lineups but rarely played live.
The band announced a reunion in 2012, and have been active since.
01. Unenslaved
02. Hair Like Christ
03. Plastic Cracks
04. Take Your Part (Gotta Encourage)
05. Drowned Out
06. United Naturally In True Youth
07. Riptide
08. Overview
09. Downpressor
10. Redemptionless (LIVE - 1993)
11 Plastic Cracks (LIVE - KXLU - 1993)
12. Drowned Out (LIVE - KXLU - 1993)
13. Self Realization (LIVE - KXLU - 1993)
14. In Memory Of (LAST SHOW - HEADLINE RECORDS - 1999)
17. No Limbs (CRUCIFIX COVER) (LAST SHOW - HEADLINE RECORDS - 1999) 18. Exit (LAST SHOW - HEADLINE RECORDS - 1999)
16. Hurt Yourself HEADLINE RECORDS - 1999) Released November 21, 2018
Posted by Blitzrecords at 15:20